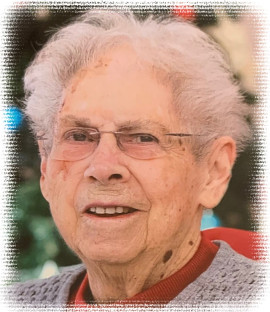 The family of Jean Wheeler is saddened to announce her passing on Thursday, February 24, 2022, at the age of 95.

Jean was born in Toronto on August 12th, 1926, to Grace and John Montgomery. She graduated from Bloor Collegiate and worked in banking, bookkeeping, and for the Singer Sewing Machine Company in both Gravenhurst and Bracebridge before marrying Robert Clarence Wheeler in 1955.

Jean and Bob settled in Niagara Falls, Ontario, and began raising a family, beginning with the birth of their first child, Robert Mark.

Jean continued her life-long study of sewing, needlecraft, rug hooking, and all things pertaining to building a thriving, healthy household while raising four children and supporting her husband in his career with Ontario Hydro. She was an active member of Our Lady of the Scapular Roman Catholic Church in Niagara Falls, serving as president of the Catholic Women’s League for several terms.

In 1974 Jean and Bob moved their growing family to the Grey-Bruce area, where Jean enthusiastically joined her ‘new’ church, St. Vincent’s, and became a Eucharistic minister and lector. She also joined the Goring chapter of the Women’s Institute and contributed to her rural farming community through her leadership in the 4-H Homemaking Club, where she coached many young people in the art of sewing, crocheting, cooking, health care, and gardening. During the many social gatherings Jean and Bob hosted at their farm, her husband took great pride in telling their guests, “Everything you see on this table is home grown.”

At Jean’s urging, having ultimately accomplished an empty nest, she and Bob moved to Meaford in 1986, where she developed a passion for quilting and increased her community involvement. She was a founding member of the Georgian Quilters’ Guild, hosted monthly ‘Quilt Time’ meetings at Albert Place, enjoyed the Meaford 55 Club for many years, was a regular walking participant in the annual Terry Fox Run, and served on the Golden Town Retirement Community board of directors until various health challenges required her to take more time for herself. Her final years were spent enjoying British murder mysteries, classical music, and selections from “The Great American Songbook”, of which she had an encyclopedic knowledge.

Jean is survived by her sons David and Paul (Carol), daughter Patricia (Bill), her grandchildren Andrew, Chantal, Jynikka, and Beth, and great-grandchildren Destiny, Camron, and Zayne.

She has joined her husband Bob and son Mark, as well as her beloved siblings Clare and Bill at the perpetual dinner dance in the sky.

The family’s gratitude to Dr. Alexandra Collins, and the exceptional staff at Bay Haven Care Community is unending. Thank you for your tireless efforts in caring for our beloved Jean, who we miss profoundly.

A private funeral mass has been arranged and a public celebration of Jean’s life will be held in the spring.

As your expression of sympathy, donations to Meaford Golden Town Outreach or Markdale and District Foodbank (cheques only please) or a charity of your choice would be appreciated and may be made through the Ferguson Funeral Home, 48 Boucher St. E., Meaford, ON, N4L 1B9, to whom arrangements have been entrusted.