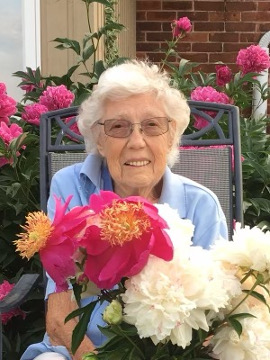 Passed peacefully at Grey Bruce Health Services, Meaford, on Wednesday, July 6, 2022, at the age of 96. Formerly of Southampton. Loving mother of Wendy(Bill) Bodine of West Windfield, New York, and Linda Squires (Mark Gallagher) of Meaford, Ontario. Cherished grandmother of James(Amanda) Barrie, and his son Cody of Texas and Eric(Megan) Bodine of Medford, New Jersey. Predeceased by her brother Alfred Bates and parents Alfred and Martha Bates.

Joyce was born in South Sheilds, England, on September 9, 1925. She enlisted in the British Women’s Army when she was 17 until the war ended when she was 21. After the war, she, along with her family, moved to the United States.

They started Tudorlab Kennel, where they bred and showed Labrador Retrievers and even won Best of Breed at the Westminster Dog Show in 1970. Joyce was always hard working and determined, so when she moved on from the kennel she built a successful career as a real estate broker. Joyce continued to work until she was 78.

The family will be having a private service at a later date, cremation has taken place. If desired, memorial contributions to the Meaford Public Library would be gratefully appreciated.