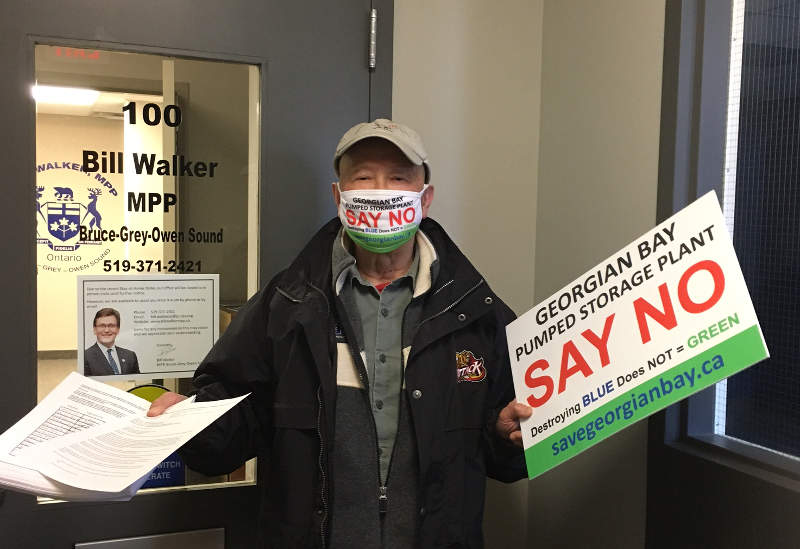 Local advocacy group Save Georgian Bay has collected 3,395 signatures on a petition opposing a proposed hydroelectric pumped storage facility on the Meaford Tank Range, and copies of the petition have been delivered to Bruce-Grey-Owen Sound MP Alex Ruff and MPP Bill Walker.

The paper petition initiative was driven by Joseph Leung, who has been collecting signatures with a team of volunteers in Meaford and surrounding areas. The petition is 239 pages long and has 3,395 signatures from Meaford, Thornbury, Collingwood, Owen Sound, Wasaga Beach, and Barrie.

TC Energy says the proposal is a green initiative that would consume inexpensive off-peak power at night to pump water from Georgian Bay into a 374-acre storage reservoir located 150 metres above the Georgian Bay shoreline on the military base. The reservoir, which would hold 20 million cubic metres of water, would be emptied back into Georgian Bay during peak usage periods, driving hydraulic turbines to generate electricity. TC Energy has been granted permission to undertake a feasibility study, and the temporary access agreement provides TC Energy with one year of access in order to complete its studies.

The DND is conducting its own study, which will determine if the proposed facility could co-exist with activities at the 4th Canadian Division Training Centre. Though a decision was anticipated from the DND late last year, there has not yet been any announcement of the results of their study.

Members of Save Georgian Bay note that between the proposed reservoir and the bay are a number of residential homes, and they also suggest that the system would be wasteful.

“Every time the reservoir is filled, it will draw water from the bay plus everything living in that water. The 30% inefficiency of the PSP is also a huge waste of electricity that could otherwise meet the energy needs of a city the size of Barrie or 16 Meafords,” said Bruce Rodgers, Environmental Consultant, and member of Save Georgian Bay.

John Mikkelsen, TC Energy’s Director of Power Business Development, told Council in September of last year that the corporation has been listening to the concerns of area residents, and he said that changes have been made to the project design in response to those concerns, adding an extra $1 billion to the original estimate of $3.3 to construct the facility.

“Since we announced our intention to study the feasibility of the development of a pumped storage project at the Meaford Tank Range, there has been much discussion in this community. From our perspective this discussion is a constructive and essential component of project development,” Mikkelsen told Council on September 28, 2020. “It has raised awareness of the project, and it has also raised important concerns which need to be addressed. I assure you we are listening, and we are taking these concerns very seriously.”

Mikkelsen pointed to a number of design changes announced last summer as evidence that TC Energy is listening to the concerns expressed by residents, and two key changes have been incorporated into the new designs. TC Energy said that the power house has been moved away from the shoreline and will be buried in a cavern. The water intake and outfall has been moved away from the shoreline into deep water which TC Energy says will avoid sensitive near-shore fish habitat. Additionally, the proponent has committed to sub-sea transmission lines as opposed to over-land transmission lines.

“We are grateful to the citizens of Meaford for their active involvement,” Mikkelsen told Council.

Members of Save Georgian Bay see things differently and they suggest that there are alternate technologies that could be explored.

“Alternative technologies are available that are 90% efficient and would not have a negative environmental impact on the Georgian Bay. Another design option for a PSP is a closed-loop plant, where a man-made lower reservoir is used instead of the Georgian Bay or open water,” said the organization.

The project is being marketed as a ‘green initiative’, with TC Energy claiming the facility will reduce CO2 emissions by 490,000 tonnes per year.

“The claim is misleading. If TC Energy built a natural gas plant, it would emit 500,000 tonnes per year of CO2. But if they build a PSP instead, it won’t emit as much CO2. Therefore, by building a PSP, TC Energy claims credit for a reduction in CO2 emissions simply because they decided not to build a natural gas plant,” added Rodgers.

Petition organizer Joseph Leung is concerned about the proposal and he has been working to oppose it for many months.

“I am concerned about the project because it will build a dam directly above residents’ heads. It is also being built on land that was expropriated by the DND during WWII for national defence purposes. To go ahead now and lease the land to a corporation for private gain is unethical,” said Leung.

Leung, along with fellow Save Georgian Bay members have been a significant presence at council and other information meetings, often carrying placards protesting the proposal. They have worked to raise awareness in the community about the project on social media, and they have held protest rallies outside the gates of the Tank Range. In addition to raising awareness, Save Georgian Bay is hoping that local political leaders will offer support to their opposition to the project.

“It is our hope that Alex Ruff will bring the petition to Ottawa and the DND at the federal level, and aid in our efforts to stop this environmentally harmful and unnecessary project,” noted Leung.