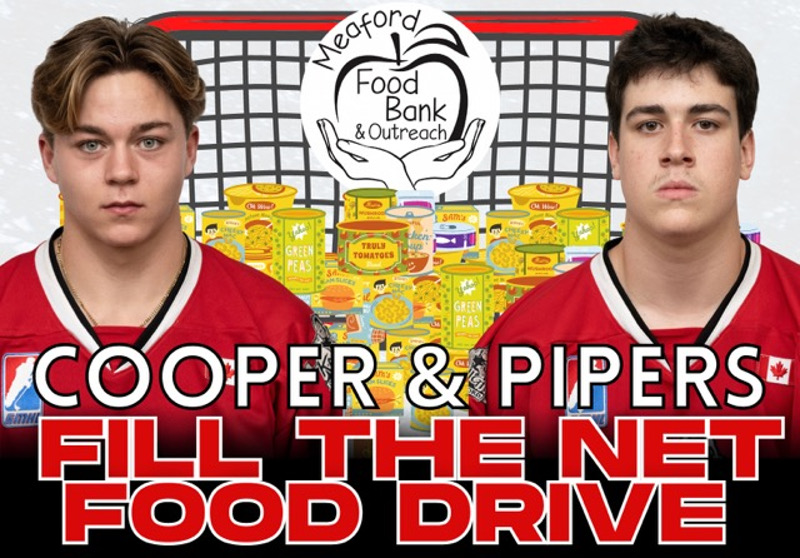 On Thursday November 10, at 7:30pm, Knights of Meaford players, Cooper Salter and Piper Post had an outstanding win over the west Nipissing Lynx.

During the game, they held a food drive for the Meaford food bank and outreach with raffle prizes in the lobby of the arena to raise awareness and give back to the community for all they’ve done for the Knights players and the Knights organization.

They chose to do a food drive for the food bank because it was for a “social justice project” for school and they thought it was the best way to maximize their platform.

“We’ve done some research on food security in our area and we found it was quite low. So by doing this we tried to help as many people out as possible. We want to give a special thank you to everyone who gave us donations for the raffle prizes, food bank donations, and money donations. We very much exceeded our expectations. But, with this community I knew we were going to do an amazing job. Our final outcome shocked everybody, loads and loads of food and donations. We’d like to thank everyone who contributed and helped us to succeed with this project. Couldn’t do it without a perfect community like Meaford,” Salter explained.

“The Knights Organization would also like to thank Knights Home Hardware, McGintys Cafe, Meaford IT Store, The Meaford Independent and everyone else who donated to make the Food Drive a success!” said the team.