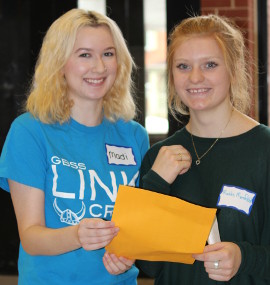 It was a "Grade" day to be an elementary school student at Georgian Bay Secondary School (GBSS) on Wednesday of last week.

The second annual "Grade 7 & 8 Day" was held at GBSS on March 9, with approximately 180 students from Meaford Community School and Beaver Valley School attending.

The day was intended to be an orientation and familiarity session for the young students preparing to head off to high school in the next two years. Grade 11 and 12 students were the hospitality hosts for the day, making it a learning experience all the way around.

Amy Teed-Acres, a staff member at GBSS, organized the event, which saw students touring the school, along with other events intended to "break the ice" for them.

During her opening comments, Teed-Acres also emphasized the "small-school" advantages of attending a facility such as GBSS. "Sometimes it's not a bad thing if everybody knows who you are," she quipped, citing the community feel that such schools build on.

Teed-Acres said she views the day as a critical component in preparing the youngsters for the big move into high school. "The idea is to help with the transition from elementary to secondary school," she said. "To get them used to what a typical class would look like, and a typical rotation through a school day, all the while having fun and building spirit between our schools. I think a lot of kids come in with a bit of anxiety and nervousness about what a high school day would like and how that's different than elementary school, and nutrition breaks versus a lunch hour, and rotating between four teachers and subjects is something that's new to them," she continued.

Teed-Acres said, "Anything we can do to set them up for success is a positive thing, and we see this as an important step in introducing them to high school, the school building, and to our teachers as well."

The day kicked off with a spirit assembly in the gym, followed by tours of the school led by the Grade 11 and 12 students from the GBSS Link Crew program that matches senior students with their incoming Grade 9 counterparts.

Following that, the elementary students were to circulate through six different classes to give them a good taste of what their future will hold.

Madi Calvert-Goetz and Maddie Merrifield were two of the Grade 12 GBSS students acting as guides for the day. It was a different experience for them to play the "voice of experience", they said.

"I think it's going to be different. I don't really know a lot of the younger kids. I would describe this as a really good school. All of the teachers are very personable and you can go to them for anything you need," Merrifield said. "They really just want to see you do well. It's small but that's not a disadvantage at all."

"Last year was the first time we held the day, and it was phenomenal. The energy in the building was fantastic, and the students were exemplary," Teed-Acres said.