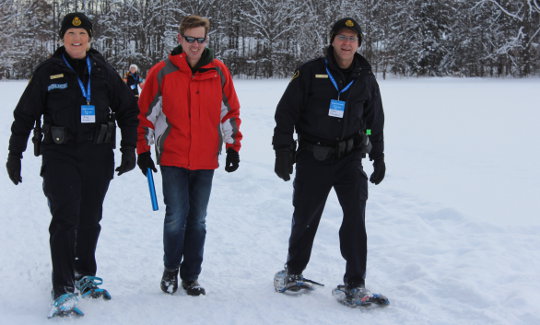 Approximately 100 people turned out at the Georgian Bay Secondary School track on January 22 to stomp cancer into the snow.

The school's first Relay for Life took on a completely different complexion Friday morning as students, joined by cancer survivors and staff, hit the ground in their boots, and more uniquely, on snowshoes.

The event, organized by the school's Pursuits program, was a fundraiser for cancer research, under the same strategy as the traditional Relay for Life programs typically held in June.

The participants were scheduled to walk the track from 9:30 until 3 p.m. More than $5,000 had already been raised by the event's opening, said Max Dennis, one of the four organizers from the Pursuits program.

"This event was started a long time ago by the Canadian Cancer Society. Normally, it's not held in January, which makes our event different. The idea is that participants go out and collect sponsors, and then stay up all night and walk the track.

"The society came to us and asked us to hold an event. We couldn't do an overnight event, so we decided to do it in January, and out event is a little different."

Dennis said he believed the GBSS event was going to prove that it could be held successfully during the day.

The snowshoe concept was to raise the profile of the Pursuits program, he added. This time of year, the 11-year-old program spends much of its time on developing winter skills. The club members wanted to showcase that.

"We figured to bring Pursuits flavour into the event, we'd make it as outdoorsy as possible," he said. "We chose snowshoes because we snowshoed all the way through Algonquin on a trip two weeks ago, and we wanted people to see what that was all about."

The goal was to reach $12,500, but Dennis said that had turned out to be a little ambitious for the first try at organizing the relay.

"I think it's turned out really well," Dennis added, "and it's going to attract more people over the years. We're very proud of the number of people attending and the community turnout." 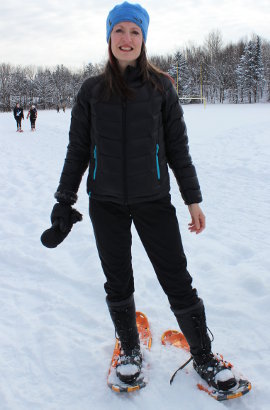 There were a number of cancer survivors in attendance, including one of the GBSS teachers.

Margaret Major survived a bout with an aggressive form of breast cancer in recent years. She's just back working part-time at the school for moment, after requiring some time to recover from the equally-aggressive treatment to halt the disease.

She said she was very gratified to see the students organizing the event, and honoured to participate in it.

Part of her treatment for the disease was a very expensive drug, she explained, one that she could never have afforded on her own. Due to that, she said she has a deep appreciation for fundraising efforts such as the Relay for Life.

Marilyn Morris, another breast cancer survivor, said she was also enjoying the event, particularly the snowshoeing.

She said did one lap of the track without them, and found the going difficult.

"It was a lot better with them on," she added with a smile.

Andrew Riddick, the GBSS vice-principal, said he was very proud of the students for taking the initiative to organize an event, for a disease that touches everyone.