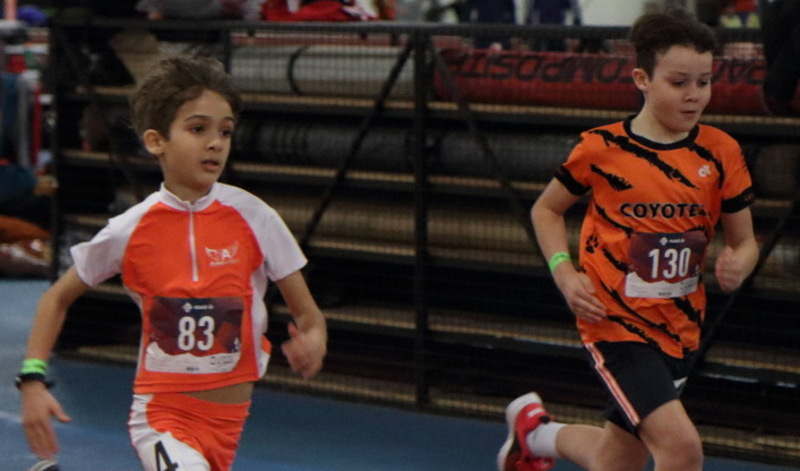 On Sunday, February 20, the Minor Track Association (MTA) hosted its first indoor track meet in two years, and the Georgian Bay Coyotes Track Club, based out of Meaford, were eager and excited to attend. With capacity limits still in effect and parents and athletes wanting to be cautious about attending an indoor race, the number of athletes was half of pre-pandemic levels, with 247 athletes from 22 teams coming from throughout the province to compete at the Toronto Track and Field Centre.

The Georgian Bay Coyotes sent nine athletes, six of whom have never had the opportunity to race at an indoor facility, to test out their winter training and see where they stand up against the province’s best. For those who are not aware, the Coyotes Track Club trains outdoor year-round despite the cold and snow and bitter temperatures, and this was a great opportunity for the athletes to see the gains they’ve made this winter on some solid footing.

Athletes, parents, and coaches started arriving at the track much earlier than usual, but with delays caused by various reasons including entering into the building the event started well behind schedule. With many athletes getting to race for the first time and seasoned veterans itching to get back onto the track, there was definitely an air of excitement and nervousness throughout the building. Once the races finally got underway they certainly did not disappoint. Of the 18 races entered by the Georgian Bay Coyotes, 18 new or first-time personal best times were set.

The team brought home five medals and enjoyed some exceptional fourth-place finishes as well. The senior boys’ 1500m was one of the highlights for the day as Coyote Emmett Leary started near the back of the pack and did some fancy passing to claw his way to the lead and then crossed the line in second place. Officials had to ask if he had completed all of his laps. The team’s youngest competitor, Joseph Spence, seemed to gain confidence as the day wore on, and he handily crossed the line in first place in the Tyke boys 1200m race. The Atom boys 800m race was a fun one to watch as it was full of Coyotes and Toronto’s Flying Angels, which made for an entirely orange-clad group of runners. The two teams often duke it out, and today was no exception. The group stayed tightly knit the entire four laps and all five runners finished within five seconds of each other, with Carter Green taking second place, Jacob Martindill taking third and Nathan Leary taking fifth. There seemed to be a high level of competition in all of the girls’ races, and it was fantastic to see our Coyotes work hard to finish their races strongly.

The Coyotes look forward to the next five weeks of training, which will lead up to the indoor Provincial Championships. For complete race results or for more information about the team, check out their website at: www.georgianbaycoyotes.com