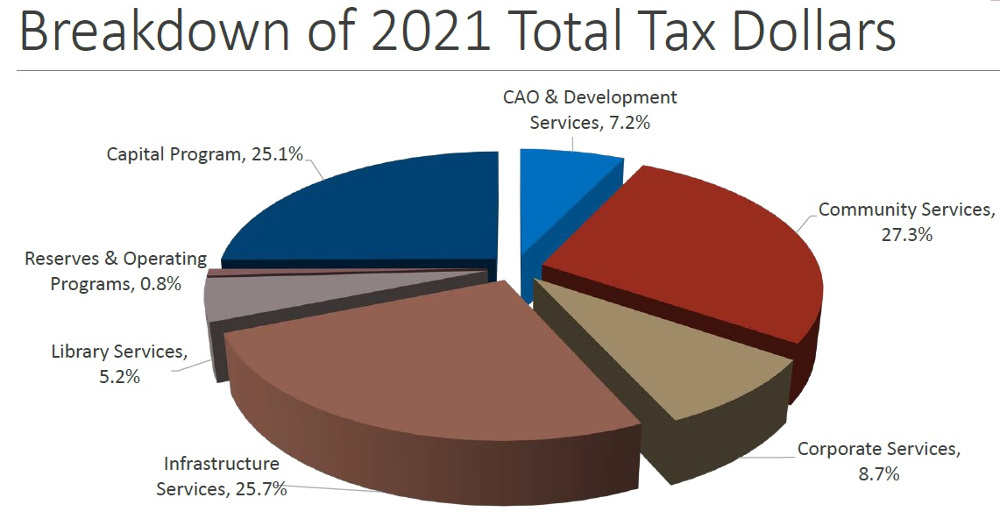 Meaford Council is one step closer to approving the operating and capital budgets for 2021, after holding a statutory public meeting at Meaford Hall on Monday, December 14, allowing public input on the final draft before Council votes to approve the budgets next month.

Just two residents attended the meeting in person, while roughly a half dozen viewed the meeting via live stream on the municipality’s YouTube channel. By Tuesday morning the archived video of the meeting had been viewed nearly 50 times.

The final draft of the 2021 budgets includes a tax levy increase of 3.43 percent. For the average residential property owners, the increase will amount to roughly $74 in 2021, or $6.17 per month. A capital budget of more than $7 million will fund a number of of projects including more than 50 kilometres of granular road resurfacing, asphalt resurfacing on Grey Avenue and Trowbridge Street East, as well as the replacement of Gillies Bridge.

The final draft of the 2021 budgets has been months in the making. After several weeks of preparation by staff, a draft framework for the 2021 budgets was approved by Council in September. In October, Council was presented with a draft budget that called for an 8.7 percent levy increase next year. In the weeks since, Council has worked to chip away at the budgets in order to reduce the required rate increase.

The impact of these items alone on the 2021 municipal budget is $564,150. With the annual increases to infrastructure funding of one percent for roads, one percent for bridges, and half a percent for municipal facilities, the proposed 8.7 percent increase would have cost the average residential property owner an extra $188 in 2021, or $15.70 per month.

After two full days of budget deliberations on November 9 and 10, Council made some changes that would have seen the required rate increase in 2021 drop from 8.7 percent to roughly 5.14 percent. Some minor adjustments on November 30, along with factoring anticipated assessment growth in 2021, has seen the required increase decreased to 3.43 percent.

In their efforts to reduce the required rate increase in 2021, Council has directed staff to increase the cost of bag tags for trash disposal from $3 to $4, a move that will provide roughly $60,000 in increased revenue in 2021, and those savings will help offset the significant increase to the municipality’s waste management contract beginning next year.

Council also decided to reduce the proposed $100,000 funding to the Fire Apparatus Reserve to just $40,000, saving another $60,000. Savings were found in the capital budget for Lakeview Cemetery, with Council reducing the funding from two new columbarium niches to one, saving another $30,000, a decision that was reversed at Council’s November 30 meeting.

Council has also approved a paid parking pilot program for Meaford’s parks that will see non-residents pay to park at Meaford’s park. The pilot project is expected to generate roughly $60,000 in net revenue in 2021.

Council also approved a 1.4 percent cost of living increase for municipal staff in 2021.

Of the two residents that attended the statutory public meeting, only one chose to offer input during the public comments portion of the meeting. Council was told that a 3.43 percent increase is too much for those on fixed incomes. The resident suggested that the rate increase should not exceed inflation if those on pensions are to be able to afford the annual increases.

Councillor Steve Bartley noted that he too is a taxpayer, and he challenged anyone to go through the hundreds of pages of budget documents to find areas to cut.

“I welcome you or anybody else to rip this paperwork apart, and there’s thousands of pages, and find more (to cut), I wish you would, and let me know, please,” Bartley said.

Mayor Barb Clumpus was pleased with the final draft of the 2021 budgets.

“We’ve spent a lot of time, and a lot of effort, and staff have worked very closely with us to reduce that initial increase from over eight percent (8.7) down to 3.43,” Clumpus told Council. “I think that’s been quite a remarkable achievement for this year, given that the fixed costs that we’ve had to bear that we have no control over, has been significant particularly with regard to waste management.”

Council is expected to give final approval to the 2021 budgets at their January 11, 2021 meeting.