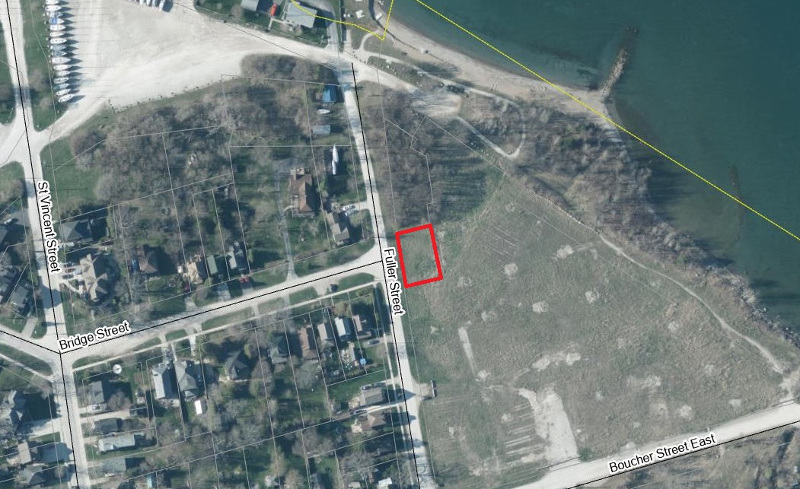 A small piece of land was cause for significant discussion in Meaford’s council chamber on Monday, January 16, with council ultimately deciding that if the property is to be sold, the municipality should be asking more.

In June of 2022, Skydev, the proponent of a mixed use development on the former Stanley Knight flooring factory which will include a hotel and residential units comprising a mix of townhouses and an apartment building, sought to purchase an unopened portion of Bridge Street, east of Fuller Street. The property is just 607 square metres (0.15 acres).

During the public consultation process last year, the municipality received a second offer to purchase the unopened road allowance from residents Hugh and Kim Grafton, who live across the street from the proposed Skydev development. The Graftons offered $125,000 for the property, and submitted a $10,000 deposit with their offer.

Both staff and council agreed that the property, should it be sold, should become part of the overall property to be developed by Skydev, however Councillor Steve Bartley was not willing to sell the property without demanding a significantly higher price.

“Whoever owns the big chunk of property should own this little chunk, I don’t care if it’s Skydev, or Steve Bartley, it should be one parcel,” Bartley told his fellow members of council. “Having said that, I have done my math on it, and you can’t compare a small parcel like that to the whole parcel, or a hundred acre farm, but you can compare it to the small lot that was sold beside it, and the price per square foot was almost double.”

Bartley reminded council that another small property was sold to the development for what amounted to more than $36 per square foot, while the proposed $120,000 sale price for the unopened road allowance would net the municipality just $18 per square foot.

Bartley proposed increasing the asking price from $120,000 to $254,752, and his motion found unanimous support from the remainder of council.

Ultimately council voted in favour of declaring the property as surplus, and to counter the offer from Skydev with the higher asking price of $254,752.