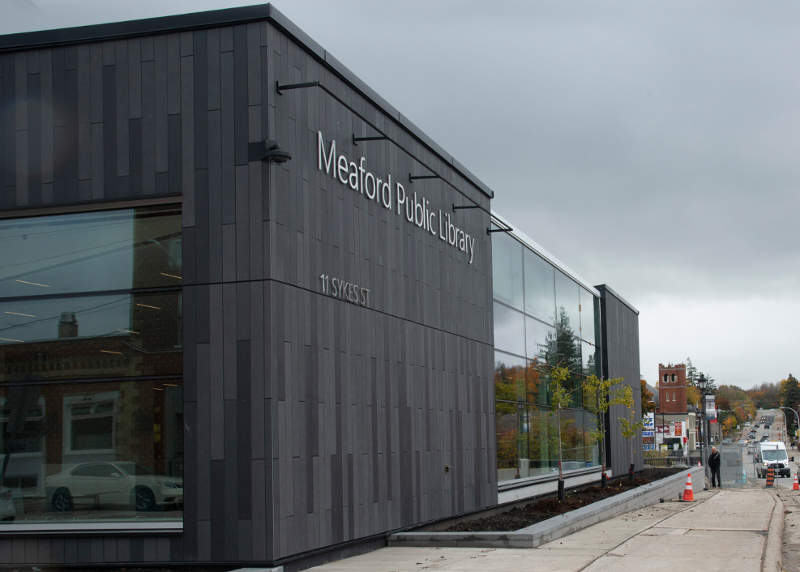 Meaford Council was presented with a report during the March 22 meeting, outlining the final costs for the construction of the municipality’s new library.

“We’ve done very well overall,” said Chapman. “We got lucky with some grants, selling the facility at 390 Sykes for more than we originally expected certainly helped by a couple hundred thousand dollars, the fundraising effort was phenomenal.”

After its establishment, the library fundraising committee set a goal of raising $750,000 for the library project, and to date they have raised nearly $900,000, helping to significantly reduce the amount of debt to be taken on for the project.

The road to a new library has been long, and has included many twists and turns. Recognizing the need to replace the current facility, previous councils had wrestled with the need for a new library for more than a decade, and a number of locations were considered, from Market Square, to the harbour, to the former Meaford Community School facility.

“In October 2017, Council gave direction to staff to negotiate with the owner of the former Foodland at 11 Sykes Street based on a facility assessment by LGA Architectural Partners (LGA). The Municipality closed on the property on January 2, 2018, at a cost of $1,525,000 based on an independent 3rd party appraisal complete by Stewart & Milhausen Real Estate Appraisers,” Chapman reminded council in his report. “In July 2019, Council awarded the construction contract to Van Horne Construction Limited for $4,372,857.18. Included in the tender was significant interior renovations, exterior building retrofits, parking lot, sidewalks and paths, the construction of a new parkette feature and furniture items including the main reception desk and RFID system. In March 2020, Council approved the furniture purchases under the Ontario Education Collaborative Marketplace (OECM) contract with an upset limit not to exceed $247,500. At that time Council was also made aware of various costs that were to be contained within the project contingency allowance of $430,000.”

Chapman told Council that the completed project requires roughly $1 million less debt than had been anticipated, noting that the fundraising effort made the difference between “having to borrow $2 million versus $3 million.”

Chapman noted that the future sale of the former library building on Trowbridge Street will be directly applied to the long term debt assumed for the project, though he noted that it was too early to provide an estimate of the funds to be realized from that property sale.

“As of December 31, 2020, the project had used $200,000 in Development Charges (DC) to fund expenses. At this time, the Library DC Reserve Fund only has a balance of about $28,500 however the project still requires $1,071,201 in DC funding. Based on this funding need, long term debt will be required to be fully funded from annual Library DC collections incurring annual debt repayments of $87,800 assuming a 15 year loan at 2.7%,” Chapman advised.

Members of Council were pleased with the report, and all expressed gratitude for the efforts of the library fundraising committee.