In the final meeting before their August summer break, members of council were presented with a report from staff outlining some of the potential benefits that the Municipality of Meaford could realize should the controversial pumped storage facility proposed by TC Energy ultimately move forward.

The report was prepared at the request of council, after a motion put forward by Councillor Paul Vickers on May 9 seeking information about potential benefits to the community found the support of fellow council members.

The motion approved by council on May 9 asked municipal staff to prepare a report outlining the potential benefits that the municipality could realize should the controversial pumped storage facility proposed for the 4th Canadian Division Training Centre ultimately move forward.

In his motion, Vickers noted that in June of 2020 the municipality identified a number of concerns with the proposal that it hopes will be addressed during the federal and provincial approval processes, but he also suggested that now is the time to begin considering the potential benefits to the community should the project ultimately be realized.

“Some of my concerns are that the project is moving along through the environmental assessment stage, and by no means am I saying that we support it or reject it at this stage. I think it’s important to go through the process, and to see what the environmental assessment stage comes up with,” Vickers told council while introducing his motion. “But in the meantime, the project does seem to be moving along through the different processes, so I just want to make sure that the municipality, you know, we’re the ones that are going to take the brunt of the construction, that we get compensated for that. Since it is on DND land, so we can’t expect an increase in assessment with this project, but there are ways that we can negotiate with TCE that if the project is going ahead that we can get something that the community can benefit from.” 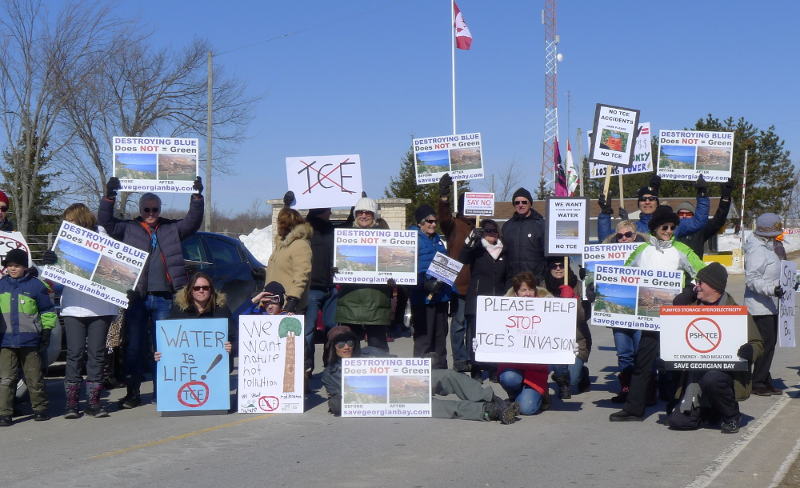 The concerns of opponents are many, ranging from fears that the facility would have negative impacts on the environment, including negatively impacting fish in the bay, to concerns that homeowners in close proximity to the site could be in danger of flooding should the reservoir fail.

TC Energy, on the other hand, says the proposal is a green initiative that would consume inexpensive off-peak power at night to pump water from Georgian Bay into a 374-acre storage reservoir located 150 metres above the Georgian Bay shoreline on the military base. The reservoir, which would hold 20 million cubic metres of water, would be emptied back into Georgian Bay during peak usage periods, driving hydraulic turbines to generate electricity.

The report presented on July 25, at the request of council, highlighted early exploration efforts by municipal staff, including discussions with TC Energy representatives to understand the range of benefits that the municipality could negotiate with the corporation in recognition of both the need for an annual payment in lieu of taxes to the municipality, along with acknowledging the sacrifices, frustrations, and inconveniences that residents of the municipality would endure throughout the many years of construction before the facility is ready for operation.

“As part of the process, potential benefits have been discussed by staff, the County of Grey, TCE, and the Economic Development Advisory Committee,” staff told council in their report. “Irrespective of these potential benefits, the Municipality remains committed to the review of the various reports that will be submitted as part of the Federal and Provincial processes and that are intended to address the various concerns identified in the 2020 staff report. This also includes the potential negative economic impacts that are contained in the 2020 report.”

The 12-page report noted that TC Energy still has many obstacles ahead before their proposed project can be approved.

“TC Energy has indicated that the next step in their approval process is to obtain approval from the Independent Electrical System Operator (IESO) to receive the electricity that could be produced from the Pumped Storage Facility. This approval is to be considered next year,” the report noted. “In addition, TC Energy has indicated that they continue to work on their numerous studies that will be required as part of the Federal and Provincial assessment processes. These studies are also intended to address the municipal concerns raised in the 2020 report.”

“TCE has identified that the property is exempt from the payment of taxes or any payment in lieu of taxes (PILT) under the Dominion Water Power Act,” the report informs. “However, they have noted that TCE would be willing to make a tax equity payment to the Municipality in a similar fashion to the PILT. TCE has identified a potential yearly payment of $1.5 million as the tax equity payment.”

There is no indication from the report presented whether the payment would be adjusted for inflation each year.

Staff did note that the proposed annual payment is roughly equal to the payment in lieu of taxes received from the military base annually.

“If the Municipality were to apply the municipal 2022 Industrial Mill Rate of 0.01576263, this would mean that they are utilizing an assessment of approximately $95 million to get the $1.5 million annual payment. In their letter, they note that such a payment would increase the non-residential property tax assessment by 78% based on the 2010 Economic Development Strategy. For reference, the Municipality will receive $1,457,716.29 in 2022 as the PILT payment for the 4th Canadian Division Training Centre, which is based on an agreed assessment for the property and related mill rate. This figure includes the education portion of the PILT, which is retained by the Municipality,” staff explained. “Staff originally requested clarification from TCE on a potential formula that could form the basis of a community benefit agreement. In that this funding would be received yearly and added to the general tax levy, it is imperative that the agreement recognize this as a stable funding, otherwise it could have a significant negative impact on the Municipality. On the basis that the Municipality operates under a two-tiered system, it is important that any such negotiations include a tax equity payment to the County as well, similar to the PILT. It is staff’s opinion that this is a good starting point to commence discussions. Further, it should also be noted that any tax equity payment should not be expected until the use is established, similar to property taxes.”

In addition to outlining early discussions of a payment in lieu of taxes, the report to council included a number of other potential benefits that could be realized, including the possibility of affordable housing, contributions to municipal capital projects, along with support for local healthcare and education.

“It has been identified that there is the potential for TC Energy to work with a developer on the development or redevelopment of land that could provide interim housing for workers and then purpose-built rentals for the general population post construction. Alternatively, a partnership could be struck with the County of Grey or other entity to develop additional affordable (social) housing in Meaford,” staff told council. “This issue is a priority given the lead time required to deliver housing. Staff will continue to work with TCE or the potential company that will be responsible for building the proposal if approved, in making the necessary connections. Should an arrangement be struck that requires the Municipality to be involved, staff would bring a residential specific report to Council.”

As far as the potential for support of capital projects, the report makes clear that it is early in the process, and further discussion will be required.

“Municipal staff have suggested a number of other ideas to TCE that relate to front end capital contributions for various projects. TCE has not indicated the potential scope of contributions that could be applied to any potential projects but has indicated that they are committed to making improvements to communities where we work and play. TCE is committed to a transparent, community-focused process where community needs (infrastructure, recreation, health, and social services) can be identified and prioritized,” noted the staff report. “Subject to the outcomes of this process, TC Energy is committed to working with Meaford, and other government partners, to consider a financial commitment to assist in the building and potential long-term operation of needed community infrastructure or services. Therefore, any further consideration of any project is premature.”

Other items included in municipal staff’s discussions with TC Energy were the potential for TC Energy’s support of non-municipal services as well.

“TCE has identified a desire to contribute to other non-municipal services that would be considered as a benefit to the community. These could include contributions to health care, education, regional facilities and residents that will be directly impacted by the proposal such as the delivery of fibre and natural gas. It could also include assisting in the front-ending of watermain extension from the urban area to optimize utilization of the existing water plant. TCE noted that they are committed to a process to better define local infrastructure deficits and consider improvements for the betterment of local residents,” staff advised council.

Staff stressed that their report should be considered as a preliminary overview of the potential community benefits that could be realized should the project ultimately move forward, and that it will take a substantial amount of time and effort before any firm agreements can be reached.

“It has been suggested by TCE that they wish to enter into a Community Benefits Agreement with the Municipality and further have noted that the suggested benefits are contingent on a resolution of support for the project from the Municipality of Meaford on a timely basis, and successful construction and operation of the facility in 2029/30. It is staff’s opinion that although it maybe appropriate to engage in discussions related to Community Benefit, it is premature to make any commitments or resolutions of support for various reasons, including the need to review the various studies and the lack of approval for the project,” staff advised. “In addition, staff would recommend that the Municipality engage an experienced third party to assist municipal staff with negotiations, when it is appropriate.”

The report to council was for information purposes only, and did not require any decision to be made by council.