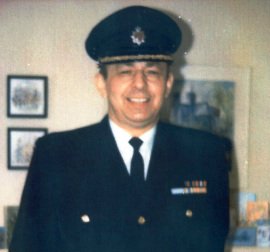 Major W.G.J. (Bill) Martin (Ret) passed away peacefully at the Mill Creek Care Centre in Barrie on Sunday, November 8, 2020, in his 97th year.

Bill was born in Ottawa and spent 32 years in the Canadian military as a member of the Royal Canadian Army Service Corps and as a Peacekeeper in Sinai with the UN. He retired at Base Borden in 1972 as the base transportation officer.

He and his wife Helen (Purvis of Selkirk, Manitoba) settled in Grand Bend, Ontario, in 1972 after retiring from military service then moved to Meaford in 1986. He was a member of the Meaford Legion for many years. After Helen passed away in 2008 Bill moved to Barrie.

Major Martin will be cremated and his remains will join Helen’s (Private Helen Purvis, Canadian Women’s Army Corps) in the Canadian Forces National Military Cemetery in Ottawa. Condolences may be sent to bjgunn72@gmail.com.