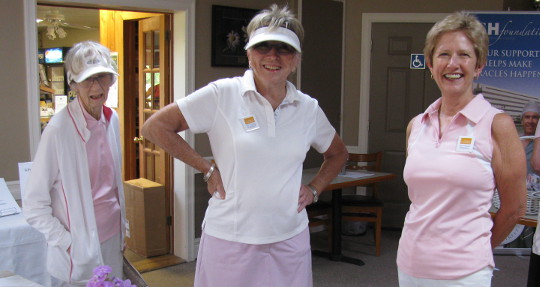 On July 21, the 18 hole ladies golf club and their guests participated in the 9th annual tournament at the Meaford Golf and Country Club.

Forty-three ladies participated in the Scramble, raising a total of $2,725 through raffles, monetary donations, and, new this year, a Putting contest and a ‘Drive like a Pro’ hole, where golf pro Cameron Burechails and his son Kyle drove for the players trying to improve their team’s score, on Millennium 7.

Convenors for this event were Bev Reed and Joan Jensen, and also on the committee were Doris George and Lou Fowler. The club dining room was decorated with pink flowers, balloons, and table settings. Flowers for the tables and carnations for each lady were donated by Nancy Ellis of Simply Unique Flowers.

President Donna Atkinson welcomed all the ladies and thanked the convenors for their efforts in organizing the day. Bev Reed thanked the members of the ladies golf club, as they had provided the muffins and fruit snack, as well as all the prizes. She and Joan then announced the prize winners.

The winning team of Joan Martin, Denise Ralph, Shirley Carpenter, and Judy Durrett had a score of 75. Second place went to Sue MacDougald’s team with 77. There was a tie for third place between Carole Frey’s team and Bev Reed’s team with 78.

The raffle items donated included a golf bag from Shane Walsh, Hollis Wealth Advisory Services; 9 holes of golf for four at Dunadel from Dundalk Golf Club; a 3 wood and 5 wood from Greg Phillips of Golf Fitters, Collingwood; a $50 gift certificate from Bill Pearson of the Golf Garage; a DVD player from Joan Martin; and a gift basket donated by Joan Jensen.

A special thanks was offered to VW who participated by offering prizes for a hole-in-one at 4 holes. Also, Knights’ Home Hardware donated a sleeve of golf balls to each participant in Drive like a Pro. The ladies appreciated the assistance of Jack Peckitt, Doug Thompson, and Brian McColgan. Lastly, Mary Alderdice of the golf club was thanked for the golf club’s contribution of waiving green fees for all the guests, and the club’s kitchen staff for the delicious lunch.

It was noted that 100 percent of the monies collected during the event are being directed to the Owen Sound Hospital Foundation, with this year’s donation towards the purchase of three microscopes for the pathologist’s use in biopsies.