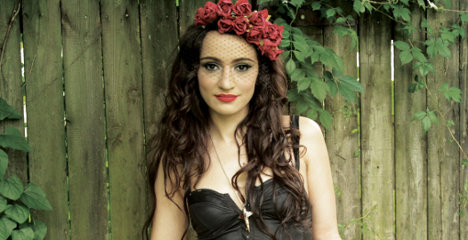 Country songstress Lindi Ortega hits the stage at Meaford Hall Arts and Cultural Centre on Friday, July 25 at 8 pm with special guest Sam Cash. Sure to be a great night out for lovers of live music, tickets are available for $40 through the Meaford Hall box office.

Groups of six or more can take advantage of a group discount; just ask at the box office when purchasing your tickets.

“This show is an excellent opportunity to see two buzzed-about artists in an intimate venue as their stars continue to rise. Lindi Ortega’s sultry sound will not disappoint as she belts out songs from her latest album, Tin Star,” said Meaford Hall in a press release.

“The song Tin Star speaks to the plight of the struggling musician,” explains Ortega, sporting her signature red lips and red boots. “To those who are so driven by their passion that they soldier on, despite the odds being against them.”

Luckily for Ortega, her voice has been catching the attention of critics, fans, and radio stations worldwide. Tin Star, the brand new album of the same name from the Toronto-born, Nashville-dwelling singer-songwriter, is incredibly close to Ortega’s heart and is influenced strongly by life in her adopted home of ‘music city’. Several songs on the album touch on the classics of country music. Loneliness, unrequited love, crumbling relationships and primal desire pepper Tin Star and give Ortega a chance to let her contemporary twist on traditional country shine through.

Produced by Grammy award-nominated producer Dave Cobb (Jamey Johnson, Secret Sisters, Shooter Jennings), the album builds on the success of Ortega’s previous two critically acclaimed works, 2011’s Juno Award-nominated Little Red Boots and last year’s Polaris Music Prize long-listed Cigarettes & Truckstops. It further flaunts the distinct voice and skilled songwriting that the singer has come to be known for and showcases the unique double-edged sound that she has defined. Her albums can be streamed online at lindiortega.ca.

Opening for Ortega is Sam Cash of the Toronto band Sam Cash & The Romantic Dogs. Heralded for being a promising up and coming youngster after the release of his debut record, Teenage Hunger, Sam Cash has undoubtedly hit his stride with his latest album Stand Together, Fall Together, and is here to stay. Listen to him online at samcash.ca, and catch both artists live on July 25.

For more information on this and other Meaford Hall events you can follow them on Facebook, visit them to buy online at meafordhall.ca, call 1.877.538.0463 or drop by the box office.