On Monday, April 28 the Meaford Skating Club held its annual awards banquet at the Meaford Golf Course.  A delicious meal prepared by Mary Alderdice and her team was enjoyed by all prior to the awards presentations.

The Meaford Coyotes Track Club have officially begun their Spring racing season with the high school members heading to the track first.

The Meaford Lawn Bowling Club has already had its first executive meeting of the new year to look at the spring/summer calendar and ensure that members will have a fun season. 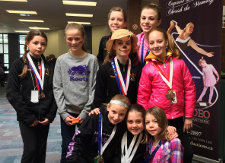 On April 12 and 13, thirteen members of the Meaford Skating Club spent the nicest weekend of the early spring season doing what they love – figure skating.

This was the culmination of their season, over which they worked very hard skating eight hours per week including at 6:45 am on Wednesday mornings.