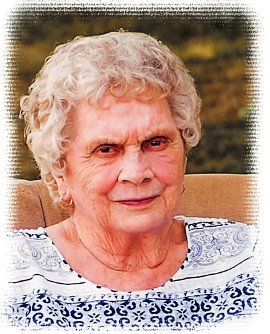 Hazel Kitchen, daughter of the late John and Lois (nee Hall) Vaughan, passed away at Meaford Long Term Care Centre on January 8, 2020, in her 89th year.

Hazel was predeceased by her husband Marven Thomas Kitchen in 1976.

She was the much loved mother of Sylvia Long and her husband Michael of Meaford and will be fondly remembered by her grandchildren: Jeremy (Vasuki) of Mississauga, Todd (Amanda) of Canmore, Alberta and David (Nicole) of Meaford, and by her great grandchildren: Melia; Kayden; Caleb, Cody, and MacKenzie.

She is also survived by her sisters-in-law Joan Vaughan, Cecile Vaughan, and Freyda Gereau, and several nieces, nephews, and their families.

Visitation will be held at the Ferguson Funeral Home in Meaford on Sunday, January 12, from 1 until 3 p.m.

Funeral services will be held at the funeral home on Monday, January 13, at 1:30 p.m. with interment to follow at Lakeview Cemetery, Meaford.

As your expression of sympathy, donations to the Meaford Hospital Foundation or the Meaford Nursing Home Auxiliary would be appreciated. www.fergusonfuneralhomes.ca