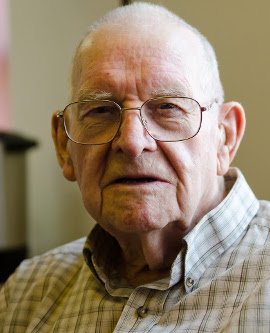 Jim passed from this life at Meaford Long Term Care Friday, June 14, in his 103rd year.

Jim was predeceased by his wife, Pauline (nee McNally, in 1999) and siblings Fred, Edith, Frank, Melbourne, and Elsie. He is survived by Art and Ruby (their children James, Trevor, and Craig), Carolyn and Bill Pearson (their children David and Jennifer Moreau) and Donna and Mike Pennington (their children Angela Smith, David, and Scott).

He was born in St. Vincent township to the late William and Annie (Free) Ford. Jim spent his life in the Meaford area (feeling some sympathy for those of us who moved elsewhere). He farmed on the 11th ine until moving into town in 1974. He worked as a carpenter doing odd jobs for many in the area. Numerous families have children’s table and chair sets made by Jim that have lasted to serve multiple generations.

Jim was an active member of the Church of Christ throughout his lifetime, as well as being involved in various community activities. Jim and Pauline served meals to many guests in their home. Family and friends were always important.

The family is very appreciative to the staff of Meaford Long Term Care for the special care they gave, especially as the end approached.

A memorial service will be held at 2 p.m. Saturday, June 22, 2019 at the Meaford Church of Christ, 113 Nelson St. W. Visitation will follow the service. Those who wish to make a memorial donation could give to Great Lakes Christian College or the charity of your choice.