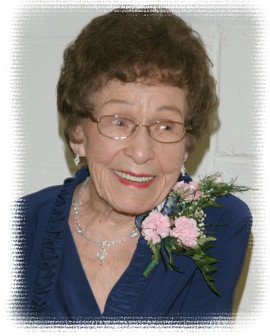 Viola is remembered as the loving mother of Brenda (late Thomas) Horgan of Kingston, Don and his wife Mel of Owen Sound, and Dennis and his wife Joanne of of Meaford. She was predeceased by a daughter-in-law Linda Knight (nee McHutchion) and by the children’s father Ivan Knight, and by her longtime friend and partner, Cliff Dignard.

She was the much loved Grandma and Great-Grandma of Salinda Horgan (Neil Hopkins) of Kingston and their children Reid and Garret; Kelly Howell of Kingston and children Matthew of North Bay and son Roland, Alicia of Kingston and Kelsie of Milton and son Keigan; Barb Cooper and sons Justin and Josh of Milton; Geoff Knight (Robin) of London and children Kiefer Knight of London, Meesha Albano of Milton; Christopher Knight of Owen Sound; and James Knight (Lindsey) and son Griffin of Calgary. A sister, Alice Kelly, and brother Albert McKennie of Collingwood predeceased Viola. She will be remembered also by sisters-in-law Yvonne Knight of Meaford and Maureen Dunaway of Missouri, and by a brother-in-law, David Knight of Toronto. She was predeceased by sister-in-law Rosalie Sims and brothers-in-law K. B. ‘Dick’ Knight, James Knight, and Victor Knight, and will be recalled as a special aunt by her several nieces and nephews and their families.

Family will receive friends at the Ferguson Funeral Home in Meaford on Thursday, June 6, from 6 until 8 p.m. A funeral service will be conducted at Christ Church Anglican in Meaford on Friday, June 7, 2019, at 11 a.m., where family will receive friends the hour prior to service. A service of committal and interment will follow at Lakeview Cemetery. If so desired and as your expression of sympathy, donations to the VON or a charity of your choice would be appreciated. www.fergusonfuneralhomes.ca