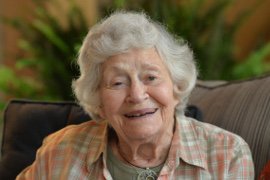 Chris was born in London, England, on June 13, 1928, and emigrated to Canada in 1953, where she and her first husband (Victor John Searles) raised four children.

In 1963 the family moved from Toronto to the Georgian Bay area and ultimately settled in the scenic town of Meaford. Chris took on Assistant Librarian duties at the local high school, and was loved by students and staff alike. She also volunteered her time to help with ARC Industries, supporting the developmentally delayed.

In the late 1970s, following the end of her first marriage, Chris returned to school and achieved her Registered Nursing diploma from Georgian College. Following this, her adventurous spirit took her out to Port Alberni, British Columbia, to nurse, followed by San Mateo, California, and then Riyadh, Saudi Arabia. While overseas, she travelled extensively, with stops in the Middle East, Eastern Europe, parts of Africa, and the Far East; memorable highlights included Bangkok, Thailand, Kathmandu, Nepal, and a safari in Kenya.

When Chris returned from the Middle East in the late 1980s she settled in Dundas, Ontario, and quickly became ensconced in the community there. At about this time, she had been re-introduced to an old friend from teenage days in London, England – John Maxted. The two hit it off very well and in December, 1990, were married. Together, they enjoyed a wonderful 28 years of married life, and became well known to the Dundas community for their involvement in St. James Anglican Church, Friends of the Library, and Lawn Bowling. They were active in supporting seniors through the Meals On Wheels program, and through charitable donations they supported numerous causes, including the Heart and Stroke Foundation, the Kidney Foundation, the Canadian Cancer Society, Habitat for Humanity, and Covenant House.

Both Chris and John retained a strong interest in travel, and they adventurously toured Canada and the United States in their brightly-coloured Westfalia camper. In her spare time, Chris enjoyed reading, upholstering, gardening, and tai chi. Family and community were always at the forefront for them and they made yearly trips to England, Wales, and France to visit family there.

Chris is survived by her four children: Hilary, Gordon, Ronald (Winona), and Gary, a granddaughter, Nicole, and great-grandson Ethan, and was pre-deceased by her beloved husband, John, and her brothers Allan and Gordon Murray. She also leaves behind her husband’s seven children and their extended families: Andrea (Paul), Guy, Erica, Ben (Ray), Stephen (Chrissy), Julia, and Roland (Janet).

She will be greatly missed by so many, and her loving and adventurous spirit will live on in each of us who had the pleasure and honour to know her.

In lieu of flowers, those wishing to do so may make a charitable donation to the Heart and Stroke Foundation, or St. James Anglican Church, Dundas.

A memorial Service will be held at 3 p.m. on Saturday, June 22, 2019, at St. James Anglican Church, 137 Melville Street, Dundas, Ontario, followed by a Celebration of Chris’s life in the church hall.

Online condolences may be made at www.marlattfhdundas.com