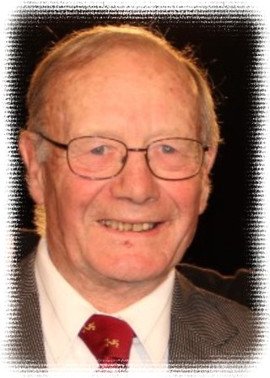 Born in Toronto on August 12, 1931, Don Haddow passed away peacefully in the presence of his loving wife ‘Bini’ at their home in Meaford on Saturday April 6, 2019 at the age of 87.

He was predeceased by his parents William Robert and Jean (nee Macdonald) Haddow and is survived by his beloved wife Albina ‘Bini’ (nee Mavec) and their children Greg Haddow of Toronto and Andy and his wife Monica Haddow of Ottawa and their children Mya and Mavec, and by his brother-in-law Joseph Mavec of Timmins.

Don enjoyed a long career with Bell Canada in Toronto and upon his retirement he and Bini relocated to their home in Meaford in 1997. Don will be recalled as an avid motorcycle racer who continued to enjoy his ride until the age of 85. He won the Canadian Championship ‘Expert Class’ in 1957 and raced on the Isle of Man and Daytona where he won the ‘Best Newcomer’ award in 1961. Don was a factory rider on occasion with Triumph and others in the industry. He was inducted into the Canadian Motorcycle Hall of Fame in 2013. He was also a respected ski instructor for several years in Quebec and the West and other ski areas throughout Canada.

Cremation has taken place and a celebration of Don’s life will be conducted at a later date to be announced.

If so desired and as your expression of sympathy donations to M.A.D.D., Grey Bruce Hospital Foundation, or Sunnybrook Hospital Foundation would be appreciated and may be made through the Ferguson Funeral Home, 48 Boucher St. E., Meaford, ON N4L 1B9 to whom arrangements have been entrusted. www.fergusonfuneralhomes.ca