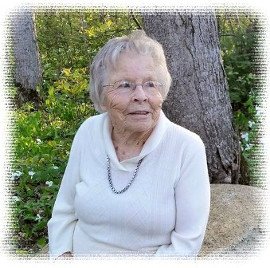 Born in Clinton, Ontario, on November 29, 1921, a daughter of the late Clarence Percival and Lulu Mae (nee Harkness) Shepherd, Marguerite passed away at Central Place Retirement Community in Owen Sound on Monday March 18, 2019, at the age of 97.

A longtime resident of Meaford, Marguerite was predeceased by her husband Keith Solomon with whom she operated the H.W Solomon & Son Insurance Agency/K.D.Solomon Insurance Agents Ltd. for many years and where she was later joined by her son Geoff in the business. Marguerite and Keith were avid outdoor people who enjoyed hiking, especially the Bruce Trail. They had both hiked it end to end. She was the Explorer leader at Meaford United Church for many years and was very active with the United Church Women also for many years. She was the first cub master (Akela) for the 2nd Meaford Cub Pack. Marguerite was an avid traveller, doing things as varied as snorkeling on the Great Barrier Reef to a homestay in Lapland to drinking retsina in the Plaka (in Athens). It should also be noted she was an excellent bridge player and helped organize Marathon Bridge and played with the Meaford Bridge Club for decades. All of her friends knew not to phone her between 7:30 and 8:00 weekdays because she wouldn’t answer the phone while Jeopardy was on.

Marguerite is remembered as a loving mother by her daughter Linda and her husband Michael Bryan of Australia, daughter Kathleen ‘Kate’ (late Doug) Grant and partner Al Thompson of Markdale, and son Geoff Solomon and his wife Mary (nee Bradford) of Meaford.

She was predeceased also by brothers Larry (Edith) of Guelph and Thomas (May) of Florida and by her sister Ruth.

Cremation has taken place and a visitation and memorial funeral service celebrating Marguerite’s life will be held at the Ferguson Funeral Home in Meaford at a date in July to be announced. Interment will take place at Lakeview Cemetery, Meaford.

If so desired and as your expression of sympathy, donations to the Bruce Trail Conservancy or Meaford Hospital Foundation would be appreciated and may be made through the Ferguson Funeral Home, 48 Boucher St. E., Meaford, ON N4L 1B9. www.fergusonfuneralhomes.ca