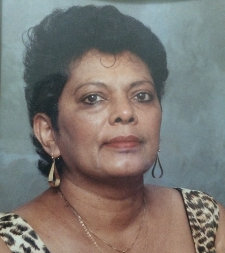 On Thursday October 16 2014, at the age of 68 and in the presence of her family, our mom (Denvy, Rawle, Dave) and dad’s (Frank) wife passed away in Barrie succumbing to idiopathic pulmonary fibrosis of the lungs.

Sheila was born and married in Trinidad. She and Frank raised their family, lived and worked in Meaford between 1973 and 1994. She is still connected to the golden town through her many dear friends as well as family (sister Molly; niece Debra).

In addition to her three sons and husband, the branches of her family tree include grandchildren Eric and Kimberly (Dave); April (Rawle); Tyler and Ben (Denvy).

Sheila was an exceptional teacher and role model to her sons entrenching values of independence, education and citizenship. She was also a devoted Presbyterian (achieved Elder status) and a pretty amazing cook as all of her sons’ friends can attest to!

In her memory, donations are encouraged to the Canadian Pulmonary Fibrosis Foundation.