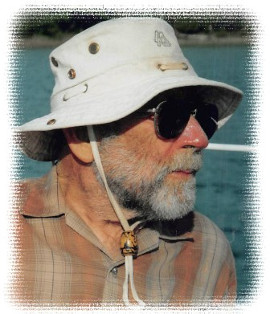 Bob was one of four brothers born to Annie (Salmond) and Harry Leech in Hamilton, Ontario. Raised by his mother after the death of his father at age six, he was a proud Boy Scout, guided by many helping hands during his boyhood. He studied as a millwright and discovered a passion for sailing in early adulthood. He sailed his boat the ‘Gypsy’ south to Houston Texas when he was 41 and lived, worked and sailed there for 53 years.

He met and married his wife Pat Karlson there. He was a proud volunteer on the restoration of the tall ship the ‘Elissa’ in Galveston and he helped teach and inspire countless people of all ages to sail. He was an ardent supporter of Planned Parenthood Houston, The Houston Food Bank, The Nature Conservancy, and more recently the Meaford Food Bank and Friends of the Library. After Pat’s death in 2014 he made the decision to move north to Meaford where he and Pat had spent many happy summers in retirement and to be closer to family and friends. He settled into his new life with characteristic resilience and was on his way to his bridge club when he suffered a massive heart attack. It was as he would wish – independent to the end.

Bob is predeceased by brothers Norman and Don and is survived by a brother Ken Leech of Calgary. He will be recalled with great fondness by nieces and nephews Patty King of Uniondale, PA, Christine Collins (Mark) of Meaford, ON, and Tim Leech (Elaine) of Oakville, ON, Diane (late Bill) McKay and Ken Leech Jr. (Mary) both of Calgary Alberta.

“We will miss him dearly and wish him fair winds and safe harbour.”

Cremation has taken place and a memorial gathering celebrating Captain Bob’s life will be shared at the Ferguson Funeral Home in Meaford, on Saturday November 19, 2016 at 2 p.m. Family will receive friends at the funeral home from 1 o’clock until the hour of service at 2 p.m.

If so desired and as your expression of sympathy donations to a charity of your choice would be appreciated and may be made directly or through the Ferguson Funeral Home, 48 Boucher St. E., Meaford, ON N4L 1B9 to whom arrangements have been entrusted. www.fergusonfuneralhomes.ca