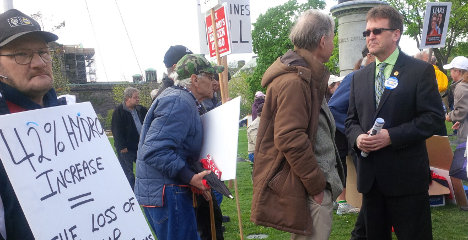 Ontarians are fed up with paying the most expensive hydro rates in the country because it’s forcing them to choose between heating and eating, said Bruce-Grey-Owen Sound MPP Bill Walker this week.

“This government is presiding over unprecedented surges in electricity prices in Ontario, which has resulted in as many as 60 households having their hydro cut off in my riding alone. People can’t afford to pay continually increasing rates,” said Walker.

“Nursing home operators have told me that rising hydro prices and utilities are now eating one tenth of their budget. This is simply unsustainable and unacceptable,” he said. “They should not be forced to use care funding to offset the effect of the Liberal government’s sky-rocketing electricity rates, waste and mismanagement.”

Walker said the same pressure is facing other public institutions, such as schools and hospitals, whose budgets continue to be frozen.

“None of our public institutions has sufficient ongoing funding to keep up with the Liberals’ sky-rocketing hydro rates, especially when they’re facing cuts to staffing levels cuts and reduction in services,” he said in reference to the big cuts in special education and 50 teaching assistant jobs at Bluewater District School Board, and the elimination of the RCU at Chesley hospital.

“As a result of the Liberals’ failed energy policies, Ontarians pay the most expensive electricity in the country, companies are leaving and people are losing jobs,” Walker said. “The biggest concern related to this fiasco is the human cost, which is the reduction in service levels that is resulting in people suffering.”

Walker joined his constituents on the front lawn of the Legislature where hundreds of Ontarians came to protest the Liberals’ failed energy policies.