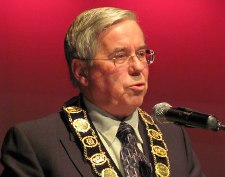 Meaford will have a new mayor after the October municipal election. Mayor Francis Richardson advised his fellow councillors during the first council meeting of the year on January 13 that he would not seek re-election.

After the meeting Mayor Richardson told The Independent that he felt it was time to step aside after helping to fix the financial woes in Meaford which the Mayor conceded were partly his responsibility. 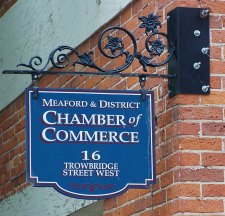 After several years of providing tourism services for the municipality, Meaford's Chamber of Commerce will be given 90 days notice of the termination of their contract after a narrow vote of 4-3 in favour of a resolution put forward by Councillor Lynda Stephens at the December 9 meeting of council.

Meaford's council has given final approval for the 2014 municipal budget, and ratepayers will see an overall blended rate increase on their property tax bills of 1.28 percent.

It was a small but feisty crowd at the Meaford & St. Vincent Community Centre on Wednesday night (December 4) when just 15 residents attended the final public input session for the proposed 2014 municipal budget.