Deputy Mayor to Sydenham Separatists – Talk to Us 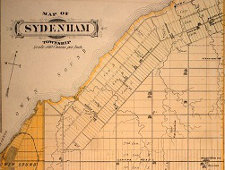 Meaford's Deputy Mayor, Harley Greenfield wants to initiate dialogue between the municipality and a separatist group in Sydenham who call themselves the Sydenham Action Committee. The trouble is, nobody knows for certain who the members of the organization are.

“I need opinion from my fellow councillors. Over the last number of months, and I guess for the last couple years, we've been hearing a number of innuendos from a group called the Sydenham Action Committee,” said Greenfield to members of council at their March 9 meeting. “I would like to have this group, or representatives from the group to come to the council chambers as a deputation or a presentation, and speak to us. Talk to us face to face.”

Greenfield noted that two years ago some very public meetings were held in the former Sydenham in which the idea of de-amalgamation was promoted, however in recent months little has been said publicly by those wishing to separate from the municipality.

“I really want to know what this group is after, what they're asking for. We around this table have been accused of shortchanging the former Sydenham financially, or perhaps even respectfully, but we've got nothing in writing, we've got no formal documentation from them as to what they are after,” added Greenfield.

Mayor Barb Clumpus agreed with Greenfield that a face to face meeting would be in everyone's best interest.

“I absolutely agree. If we have shortchanged anybody, we need to know about it. We need to do what we can to make sure we are representatives of the whole municipality. And also to have a name and a face, who these people are, it doesn't do any good to be anonymous because we don't know who to respond to or how to go about this,” offered Clumpus.

The Sydenham Separation Facebook account was established at some point in 2013. On their website (sydenhamactioncommittee.ca) the group asks supporters to visit their Facebook page and submit a request to “friend” the group. According to the page, just two people are “friends” with the organization.

Much more information is available on the website including an explanation of the desire for Sydenham to separate from the Municipality of Meaford.

“We are a group of Sydenham residents and taxpayers, just like you. Some of us were born here and can trace our ancestry to the beginning of the township. Some of us have lived here for less than two years. The thing that unites us is our determination to take actions to achieve better governance. We petition your support for Sydenham de-amalgamation. We recognize that the process of de-amalgamation is a long journey with many steps. We are seeking constant improvement along the way,” informs the website though there are no contact names to be found anywhere on the website.

The group appears to have a confused message, as on the one hand they lobby for separation, while on the other they appear to be outlining preferred changes to how Meaford is governed.

“We believe that the councillors we elect should be directly involved and accountable for decisions, and not kept at arms-length by numerous consultants, or insulated from the decision-making process by various levels of staff. We believe that department heads should report directly to council, and not be filtered by an executive hired to buffer council from the day to day functions of the municipality. We believe our councillors should take a “hands-on” approach. There is no larger population base here. We believe our municipality should conduct itself in a manner that consciously demonstrates it is always mindful of the size of the population that supports it,” reads another paragraph on the website.

Council asked the municipal Clerk to make an attempt to contact the group in order to invite them to make a presentation to council in order to outline their concerns, and to potentially work toward solutions.