Plenty of Good News in Final Quarterly Report for 2014 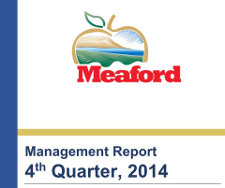 Meaford's senior management had plenty of good news for council on Monday, March 2, in the form of their final quarterly report for the 2014 year.

The 39-page report outlines the activities, successes, and challenges of all municipal departments, and while the major announcement in the report might have been the anticipated $346,000 surplus from 2014, there were several highlights worthy of note.