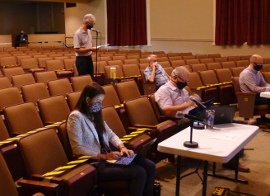 TC Energy, the proponent of a more than $3 billion hydroelectric pumped storage facility on the Meaford Tank Range, provided an update to Council during their September 28 meeting at Meaford Hall.

The proposal has been the subject of significant concern for many Meaford residents since first learning of it nearly a year ago. In the months since the proposal first surfaced, a number of Meaford residents mobilized to raise awareness both in the community and beyond its borders.

TC Energy says the proposal is a green initiative that would consume inexpensive off-peak power at night to pump water from Georgian Bay into a 374-acre storage reservoir located 150 metres above the Georgian Bay shoreline on the military base. The reservoir, which would hold 20 million cubic metres of water, would be emptied back into Georgian Bay during peak usage periods, driving hydraulic turbines to generate electricity. TC Energy has been granted permission to undertake a feasibility study, and the temporary access agreement provides TC Energy with one year of access in order to complete its studies. The Department of National Defence is conducting its own study, which will determine if the proposed facility could co-exist with activities at the 4th Canadian Division Training Centre.

“Since we announced our intention to study the feasibility of the development of a pumped storage project at the Meaford Tank Range, there has been much discussion in this community. From our perspective this discussion is a constructive and essential component of project development,” John Mikkelsen, TC Energy's Director of Power Business Development, told Council. “It has raised awareness of the project, and it has also raised important concerns which need to be addressed. I assure you we are listening, and we are taking these concerns very seriously.”

Mikkelsen pointed to a number of design changes announced over the summer as evidence that TC Energy is listening to the concerns expressed by residents. Two key changes have been incorporated into the new designs. TC Energy said that the power house has been moved away from the shoreline and will be buried in a cavern. The water intake and outfall has been moved away from the shoreline into deep water which TC Energy says will avoid sensitive near-shore fish habitat. Additionally, the proponent has committed to sub-sea transmission lines as opposed to over-land transmission lines.

“We are grateful to the citizens of Meaford for their active involvement,” Mikkelsen told Council.

Deputy Mayor Shirley Keaveney asked Mikkelsen if he and his team would be willing to meet with residents of what has come to be known as the 'impact zone' (residences in close proximity to the proposed facility), and he indicated that TC Energy would welcome meetings with residents.

While it was open to the public, few attended the meeting, however some residents submitted questions to be read during the public questions component of the agenda.

Keaveney also asked for an update on the status of negotiations with the Saugeen Ojibway Nation (SON). In his presentation to Council Mikkelsen noted that, “TC Energy recognizes and acknowledges that the project falls within the traditional territory of the Saugeen Ojibway Nation (SON). The project has initiated early engagement and dialogue with the SON communities and is working towards a meaningful partnership to develop and ultimately jointly own the project. TC Energy is committed to building long term, mutually-beneficial working relationships with First Nations and Métis communities and that will be the objective for this project.” However he could provide no further update to the progress of the negotiations at this time.

One resident who lives below the proposed reservoir site asked whether a developer would be allowed to build homes below the site had the reservoir and dam been there first.

“I live on Captains Court, in the impact zone of TC Energy's proposed project site,” resident Joanne Devaney told Council in her written submission. “During a tour of my neighbourhood with members of council, I mentioned that the reservoir dam will be built directly over my home, I had asked at that time if the reservoir and dam was already built, would the municipality permit a developer to build homes below it, the answer was no. I would like to know how TCE can even propose to build a massive storage dam above our homes? Who permits this? And what are the liabilities to the municipality for any property damage, loss of drinking water, or personal harm during and after construction?”

“Would the municipality allow development? A lot of those types of risks are mapped through appropriate agencies to deal with, typically they are environmental protection zones so development is prohibited through the designation and implementation of those provisions,” Armstrong advised Council.

The Department of National Defence has twice extended the deadline for the submission of comments, and those wishing to comment had until September 30 to do so. Mikkelsen told Council that he expects the DND to make a decision on the feasibility of the project on their land by the end of November.