Arena to Operate This Winter, But No Public Skating 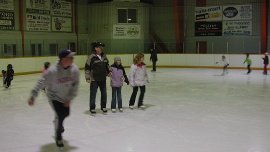 At their September 14 meeting, Meaford's Council voted unanimously in favour of operating the Meaford & St. Vincent Community Centre and Arena this winter, however due to COVID-19 distancing and gathering protocols, there will be no public skating this year.

Council was provided with four options for the community centre and arena operations for the 2020-21 season, ranging from a complete shutdown of the facility to full operation with some revised operating practices.

“Based on the impacts of COVID-19 some standard operations will need to be revised. To ensure a best practice approach, ice rentals will not be able to occur back-to-back,” Council was advised in a report from staff. “All rentals will be allowed access 15 minutes prior to the rented hour and must leave the facility within 15 minutes after use. In effect, this will create 1.5 hour 'rental blocks'. Moreover, users will be required to exit out the back entrances of the arena to ensure that one group isn’t meeting up with the next in the foyer/front entrance area.”

Meaford Treasurer Darcy Chapman noted that the operation of the arena and community centre has historically been subsidized by Meaford ratepayers.

“It's worth noting that as a baseline the Meaford & St. Vincent Community Centre and arena operations is subsidized by the taxpayer. For the 2020 budget it was a $176,000 net loss,” Chapman advised Council. “So that's what we are starting with. We've provided four different options in the report to Council. All of those (options) compound, or add to that loss.”

Chapman noted that, even with full operation of the facility this winter, there will be no public skating.

“Until things are back to normal from our perspective, and this is important, we will not be doing public skating. The municipality would be required to maintain contact tracing lists, we'd have to have to have a staff person there effectively as a greeter to do nothing but take people's names down,” Chapman advised.

Chapman said that municipal staff have spoken to more than 30 other municipalities, and only one of communities they contacted will be allowing public skating this season. Council was advised that public skating can draw as many as 200 people to the arena in a two-hour period.

Council was also advised that spectator areas of the arena will “not be operational at this time. For users under ten, guardians will be allowed in the facility to help get skates on but must leave once the skaters are on the ice. Only the main set of public washrooms will be available with some of the stalls being locked out to limit the cleaning time required.”

Municipal staff have also engaged local sports organizations in order to determine potential usage of the facility this winter.

“Staff have been in contact with minor hockey, figure skating, Meaford Knights, adult leagues, and social groups to determine desire of ice time. At this time, staff are aware that figure skating wishes to secure approximately 10 hours weekly and would be willing to start skating immediately. The Knights are looking at starting training in early November and would initially want 10 hours of ice then reducing to the normal 7.5 hours starting in December,” Council was advised. “Many of the adult and social groups have not confirmed ice time given the possible impacts of play, inability for contact, and the lack of camaraderie due to the 15 minute in/out rules. Minor Hockey has also advised that due to Hockey Canada and Ontario Hockey Federation best practices, the overall program is going to be drastically altered. Given the changes reflecting only skill development, minor hockey will most likely only be operating to accommodate half ice practices. The expectation of overall ice requirements at Meaford’s facility will be six or seven hours weekly.”

Councillor Steve Bartley expressed some reservations about fully operating the arena given the current lack of firm commitments from traditional users for ice time.

“I'd hate to spend this money to open the arena and just use ten hours per week, I think we need commitments,” said Bartley.

With Council opting for the full operations option provided in the report, the arena will be open for ice time rentals and for the use of sports organizations. The community centre side of the facility will also be available for bookings. As noted in the report option one would “Ensure continuity of operations allowing ice surface and hall rentals to occur from 7 a.m. through to 11 p.m. Monday to Friday and 9 a.m. to 2 p.m. Saturday & Sunday. Additional rentals for small gatherings in compliance would also be allowed on weekends (i.e. baby showers, birthdays, weddings, etc.) Although standard hours of operations would be maintained, ice rentals would still be affected given the need to have 1.5 hour blocks. Of the 44 hours of normal weekly ice rentals 35 hours are within the prime rental window of 3 p.m. to 11 p.m. weekdays. With new operating protocols in place, a maximum of 25 hours could be accommodated.”

Operating the community centre and arena for the winter season will add some extra costs.

“Two additional facility staff would be required to operate under this option. Total cost would be in the magnitude of $65,000. The reduction in available prime ice is still expected to negatively impact overall ice rental revenue by $25,000. COVID limitations on maximum group size of 50 people will also affect hall rental income and bar revenues by an added $12,000. Added cleaning costs including equipment are estimated at $14,000,” staff advised Council. According to staff, the total budget impact is estimated at $116,000.

The losses that the arena will see as a result of these changes can be offset by provincial funding earmarked for COVID-19 operating costs.

“Meaford was advised on August 12, 2020, that the provincial government, through the Safe Restart Agreement, will be providing immediate funding for municipal pressures. This $362 million fund is being allocated to all Ontario municipalities with Meaford’s share being $352,600 to address priority COVID-19 operating costs and pressures. Lost revenue and/or increased operating costs related to arena operations would qualify under this program,” staff advised Council.

Members of Council were eager to see the community centre and arena operate as fully as possible given the current restrictions and protocols in place due to the ongoing COVID-19 pandemic.

“I am very much in favour of having the arena opened up,” offered Councillor Tony Bell. “I think having it open is important.”

Councillor Paul Vickers suggested that Meaford should operate the arena as fully as possible in spite of the additional losses that will be realized.

“I think we have to open up the arena,” Vickers told Council. “So I suggest we do what staff suggests, that we open it up as is, fully knowing that we may take it on the chin. To keep everything closed down forever, I don't think is the answer. We have to try to take a step ahead, if we end up taking a bit of a step backwards, then at least we tried. If you never take a step forward, you'll never get anywhere.”

The remainder of Council agreed and unanimously voted in favour of option one provided by staff, which will allow for the full operation of the community centre and arena within the constraints of current distancing and gathering requirements.