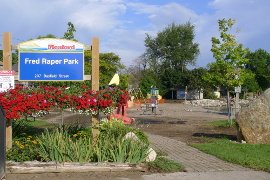 Over the past week, work crews have been busy with remediation efforts for two of Meaford's shoreline parks, which have been largely off limits to the public since autumn winds combined with high water levels filled the parks with a significant amount of debris.

“At Fred Raper park this past week a total of 31 truckloads of washed-in sand, stone, and debris was removed from the playground area at the west end of the park to restore access to trails, benches, gazebo, and washrooms,” Meaford Treasurer Darcy Chapman told The Independent on Monday. “A new electrical surface was installed to the washrooms to replace the damaged electrical line exposed by previous storms. The final electrical connections is expected early this week.”

While beach access has been returned at Fred Raper Park, the playground equipment is still off limits to the public and is surrounded by orange snow fencing.

The goal of the remediation efforts is to return access to the beach areas for the remainder of the season.

“This was done to ensure the public could access the water/beach area for the remainder of the summer. In late September or early October the contractor will be back to complete added works to the retaining wall along Bayfield Street along with reinstating grassed areas and lookout/bench locations,” Chapman explained.

“Future work at David Johnston Park will include remediation of the existing groyne,” Chapman said, who also expressed appreciation for the flexibility of the contractor undertaking the work. “The contractor was gracious enough to split up the work to expedite public access to our beach areas, so residents and visitors alike could enjoy Georgian Bay for the rest of what’s been a very warm summer.”

In March of this year Council approved $80,000 in funding to rehabilitate both Fred Raper and David Johnston parks. A tender was released on May 21, which resulted in two bids on the project, both hundreds of thousands of dollars more than Council had approved.

“Parks and Facilities staff released a tender to rehabilitate Fred Raper Park and David Johnston Park on May 21, 2020. The tender included a number of remediation projects at each of these locations. The projects were listed in priority by staff from highest to lowest in an effort to give the Municipality the ability to choose certain projects listed within the scope of work at each of the parks should the there be budget constraints,” staff told Council in a report submitted during council's July 13 meeting.

The two bids received were each initially in excess of $400,000, far more than the $80,000 council had approved. Chapman said during the July 13 meeting that the $80,000 that had previously been approved would be used to fund the most critical rehabilitation work, leaving the remaining work to be done in the future.

“Future works beyond what was awarded in this contract will be reviewed by the Parks Advisory Committee and included in the 2021 budget deliberations,” Chapman told The Independent this week.