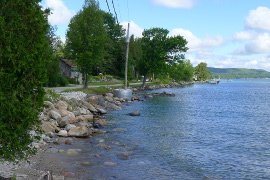 With traditionally windy autumn weather just weeks away, shoreline erosion and remediation continues to be a top priority for the municipality and Council.

Two of Meaford's shoreline parks will soon see some remediation work undertaken, but shoreline erosion doesn't just happen in public spaces. The municipality has undertaken work on shoreline roads, and many shoreline property owners have had to make repairs to their own properties in recent months.

During their July 27 virtual meeting, Council heard from residents of Lakeshore Road South, a section of road that provides access to 25 homes, where significant erosion damage has been experienced in recent years. The residents are seeking help from the municipality, however the municipality has received a legal opinion that as it is a private road, the municipality has no ownership, and therefore should not be undertaking work on the road.

For Evelyn Dean, a resident of Lakeshore Road South, and a representative for the residents' road association, time is running out to have remediation work completed before the windy autumn months arrive.

“Lakeshore Road South has experienced significant erosion since the fall of 2019, resulting from the rising water levels and major wind storms, which I think we all know about,” Dean told Council in a deputation made at the beginning of the July 27 meeting. “The road itself now is in major jeopardy. It provides access for 25 property owners and municipal taxpayers, and immediate emergency repairs are required to be completed by the fall of this year, prior to the next major storms.”

Dean told Council that the waterline is moving ever closer to their road.

“Some of our areas along the road look like they have two, or two and a half feet (from the water), but if you actually look along the shore, there's about a foot and a half that's already eaten away,” Dean explained. “So in many sections the water continues to get closer to the road.”

The road association and the municipality have not been clear on the ownership of the road until recently.

“In November of 2017 our association met with Darcy Chapman to review our concerns around ownership on the common road access section because we were all concerned about how we resolve issues related to that section,” Dean told Council, saying that at that time ownership of the road section was unclear.

Dean noted that on Friday, July 24 of this year, residents of the road learned of a legal opinion sought by the municipality to answer the question of the road's ownership.

Perejmybida noted that on July 10, correspondence was received from the road association highlighting issues and noting the uncertainty of ownership of the road.

Perejmybida told Council that based on the information provided by the municipal lawyer, staff has no authority to undertake any work past 184 Lakeshore Road South, “as the work would be completed on private property. In addition, staff are concerned with regards to the precedent it may set for municipal work or payment for work to be completed on other private roads.”

Members of Council urged staff to continue discussions with the road association, and to develop a long-term strategy for remediation and protection of the road.

Meaford CAO Rob Armstrong told Council that staff could be directed to work towards making the road a public road.

Deferral wasn't an option for Councillor Paul Vickers, who reminded Council that the storm season is on the way.

“If we have no intention of taking this over as a public road, deferring it for a longer period of time does not do these people any good because winter storm season is coming, winter will be here soon,” Vickers noted. “So I don't think we'd be doing anybody any favours.”

Council voted against Bell's proposed deferral, and instead amended the staff recommendations to direct staff to negotiate the potential for municipal ownership of the road. The amended resolution was approved by council in a 5-2 vote.