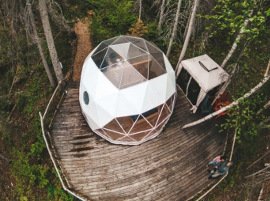 In a narrow 4-3 vote at their July 27 meeting, Meaford's Council gave final approval to a zoning amendment request that will allow a proposed luxury glamping facility to be established on a 25-acre property on Sideroad 16 at Concession 12.

The proposed glamping (glamorous camping) operation has seen significant opposition from neighbouring property owners over the past several months. Concerns expressed by neighbours have ranged from fears of noise and light pollution to potential impacts on local groundwater supply.

Prior to voting on the zoning amendment request, Council considered a friendly amendment proposed by Councillor Paul Vickers and seconded by Councillor Harley Greenfield to limit the number of geodesic domes constructed on the property to four rather than the eight identified in the proponent's plans.

That proposed amendment found the support of just one other member of council, Deputy Mayor Shirley Keaveney, and as a result was defeated. However Council heard from the proponent of Back Forty Glamping that they plan to start with four domes in their first season, and would expand to the desired eight domes no earlier than 2022. CAO Rob Armstrong advised that the phasing in of the glamping development can be stipulated in the yet-to-be-finalized site plan agreement.

“That is something that we could include in the site plan agreement,” Armstrong advised Council. “But that's not something you can do through the zoning bylaw.”

Armstrong also reminded Council that the eight units included in the proponent's plans are supported by Meaford's Official Plan as well as the studies that have been undertaken, and he cautioned Council regarding the suggested limit to the development of four units in the zoning amendment.

“If there was an appeal (to the Local Planning Appeal Tribunal), Council would need to be prepared to defend why in your opinion four units is acceptable, but eight is not. You would have to bring that evidence in front of the LPAT because your current staff planning position is that eight would comply,” advised Armstrong.

With the zoning amendment approved, the proponents of Back Forty Glamping can move forward with their plans, including the development of a site plan agreement which would require the approval of Council and would be binding.

“The site plan agreement is going to have provisions, it's approved by Council, it's registered on title to both the McIntoshes (current property owners and proponents of the glamping operation) and anybody else that takes interest in the property following the McIntoshes,” Armstrong advised.