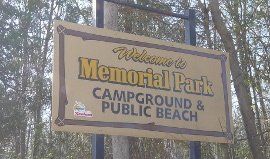 The long-awaited draft Master Plan for Memorial Park was presented to Council during their July 13 virtual meeting, and the public now has until August 31 to submit their comments on the draft, prior to Council's discussion and vote.

The long-range vision for Memorial Park included in the draft plan would see improvements to park infrastructure, and a re-imagining of the park's campsites, resulting in larger but fewer (from the current 114 sites to 87) sites. The estimated costs, if all components were to be implemented over the next 25 years, would amount to more than $4 million, with as much as $1 million of improvements proposed over the next five years.

“The Advocates for Memorial Park, locally known as AMP, have a number of concerns and observations that we would like to bring to Council's immediate attention,” said Susan Taylor, who read a statement to Council on behalf of AMP during the virtual meeting. “As you will recall, when the Memorial Park Master Plan commenced, AMP hosted a public meeting where we launched a public survey, the results of which were then presented to you in September of 2019. At the time of our presentation AMP was assured that the results would be passed on to Burnside (the consulting firm that helped develop the draft plan) for inclusion in the final plan. Regrettably, it appears that either Burnside never received AMP's information from municipal staff, or the consultant was remiss in including any reference to it in this Master Plan. It appears that our efforts were totally disregarded.”

In the executive summary of the draft Master Plan, R.J. Burnside & Associates highlighted the public consultation undertaken in the development of the document, though they didn't specifically mention AMP in the 201-page document.

“Consultation was a key part of the Master Planning process for Memorial Park. The opinions and preferences of the Park users and various interested groups allowed the Project Team to generate four alternative design options which balance the needs of the various stakeholders and users of the Park and its facilities, and to help identify the necessary upgrades needed for the Park’s various facilities. Consultation Meetings with interested groups and stakeholders took place in November and December 2018,” Burnside noted in the summary. “In total, 166 comments were received.”

The full draft plan can be viewed and downloaded on the municipal website (www.meaford.ca/en/explore-play/memorial-park-master-plan.aspx).

Acknowledging the significant public interest in the Master Plan for Memorial Park, Meaford Treasurer Darcy Chapman told Council that the public will have an additional opportunity to provide input prior to any Council decision.

“Quite often we have master plans, and what we do is have the consultant present the plan in meeting number one, and then in the follow-up meeting staff brings forward a report asking Council to approve the plan for use as a guiding document moving forward,” Chapman told Council. “We're going to do things a little differently with this one. What we're asking for is public input starting tomorrow, effectively, all the way through to the end of August. We're hoping that gives people enough time to review the draft of the plan.”

Chapman also told Council that the newly created parks advisory committee would be given time and an opportunity to provide input to Council. He anticipated that a report would be brought before Council at their September 14 meeting, provided the advisory committee has been able to hold a meeting to consider the draft plan.

Comment submissions must be made by August 31, 2020. Residents can submit their comments online, or by mail or email to: