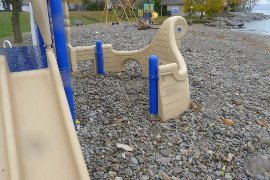 High water levels in Georgian Bay combined with heavy autumn winds wreaked havoc on two of Meaford's shoreline parks, filling their grounds with as much as two feet of rocks and other debris, forcing their closure until rehabilitation work could be undertaken.

In March of this year Council approved $80,000 in funding to rehabilitate both Fred Raper and David Johnston Parks. A tender was released on May 21, which resulted in two bids on the project, both hundreds of thousands of dollars more than Council had approved.

“Parks and Facilities staff released a tender to rehabilitate Fred Raper Park and David Johnston Park on May 21, 2020. The tender included a number of remediation projects at each of these locations. The projects were listed in priority by staff from highest to lowest in an effort to give the Municipality the ability to choose certain projects listed within the scope of work at each of the parks should the there be budget constraints,” staff told Council in a report submitted during council's July 13 meeting.

“We got held up bringing this to Council because, if you've read the report, you recognize that we are substantially over budget on these projects,” Treasurer Darcy Chapman told Council. “Originally the low budget came in north of $400,000, so we used provisions in the purchasing policy to go back and negotiate with them, they reviewed everything, and the price was reduced by $160,000, but we still ended up right around $260,000, which is three times the $80,000 budget.”

Chapman told Council that staff had been concerned that the work requested would exceed the established budget, so the tender was broken down to individual components allowing more flexibility to choose higher priority tasks over less important ones.

“Given that the project is so far over budget, there are certain aspects that would have been nice to do as opposed to need to do, and as staff we're asking for the ability to negotiate with the bidders to try and secure a price to get the meaningful work done that is necessary in order to protect the infrastructure,” Chapman told Council.

Chapman said that staff's hope is that the $80,000 that had previously been approved would be used to fund the most critical rehabilitation work, leaving the remaining work to be done in the future.

“Hopefully it would get us to the point where we've remediated the spaces enough that they can at least be opened up so that people can access the water, that's what we are really hoping for,” Chapman told Council. “The playground at Fred Raper Park still won't be accessible, still won't be usable, because we won't be able to clear that appropriately and put new cover down, but at least this would open up the waterfront spaces.”

Chapman suggested that Meaford's new parks advisory committee could help develop a long-term plan for the two parks, and funding could be included in the 2021 budget in order to address the outstanding rehabilitation needs.

Chapman could not advise when the work would get underway, saying it would depend on the contractor's availability.

Councillor Paul Vickers questioned the timing of undertaking the projects with July half over, and the windy autumn season on the way.

“My concern is that we don't do any work that isn't needed, just the bare minimum. The chances are this isn't gong to get done until maybe the middle of August, and basically that will get it done just in time for the fall season for the potential storms to be coming in, so I guess my concern is that we're kind of throwing good money after bad,” Vickers suggested.

Staff had previously noted the concern of investing funds into the parks only to have the work negated by new wind storms. In March of this year, staff presented Council with four options for addressing the condition of the two parks. The first option was to close the parks for the coming season at an estimated cost of $1,000. The second option would have re-established both parks with minor modifications at a cost of $25,000.

The third option, and the one recommended to Council, was to naturalize both parks which staff estimated would cost $45,000 – $60,000. With this option playground equipment would have been removed from Fred Raper Park and relocated to other parks in the municipality.

The fourth option, and the option ultimately supported by Council, was to re-establish both parks and their service levels to what they were last year with an addition of a retaining wall at an estimated cost of $50,000 – $80,000.

In their July 13 report to Council, staff again cautioned that any work undertaken could be undone by future storms.

“Any remediation in these two parks can and will be affected by the current and future water levels in Georgian Bay. This could affect the activities in the parks and could lead to the closure of the area. There is potential that any funding spent on remediation in these areas could be washed away with significant storm surge or continued increases in lake levels,” staff advised.

Councillor Vickers suggested, given the real concern of future storms undoing any remediation work, that the bare minimum be spent in order to protect municipal infrastructure, and to leave the remaining work for the future.

“Just protect the infrastructure, and write the year off. We're so far down the line already, what would be the use of putting any extra money into it just to see it get washed away in a November or December storm,” Vickers said.

Council approved the staff request to negotiate with the bidders in order to have the highest priority work completed this summer with a maximum cost of $82,403.19, leaving the remaining work for next year.