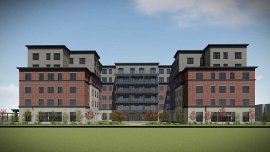 A proposal for a new long-term care centre and retirement home complex on the former Meaford Community School property on Cook Street is cause for concern for a number of Meaford residents, who participated in a virtual public planning meeting on Monday, July 6, where their message was clear: residents support the development generally, but there is significant opposition to the proposed six-storey height of the building.

Official Plan and Zoning Amendment applications have been submitted by peopleCare Inc. to establish a mixed-use 'campus of care' facility on the property.

The facility would include 70 retirement units, 50 seniors’ apartment units, 128 long-term care beds and 19 townhouse units, for a total of 267 units on the 6.32 acre property.

Chris Pidgeon of Kitchener-based GSP Group, a consultant for the proponent, made a presentation to council in which he outlined the current concept and designs for the property, noting that the facility would increase the number of long-term care beds from the 77 at their current facility on William Street to 128, and the complex would also provide housing for seniors in the apartment building and townhouses. Pidgeon suggested that if granted Official Plan and zoning amendments, construction could begin in 2022.

Community interest in the proposal has been significant, and in spite of the meeting being held virtually, roughly 13 residents provided input with written comments; those comments were not read to Council and viewers during the meeting, though planning staff said that Council had been provided with the comments. Another ten residents registered to participate in the virtual meeting by providing comments live through the Zoom application being used by the municipality for council meetings during the COVID-19 emergency, though three of those registered to participate experienced technical difficulties when it was their turn, and they were unable to connect and have their comments heard.

The residents who were able to participate virtually made it clear that there is support for the general concept of the facility, but not for the proposed six-storey height of the building which would be significantly taller than any existing buildings in the municipality.

Alan Reid, who owns a home neighbouring the proposed complex, told council that he recently retired to Meaford after a career that saw him reside in major cities around the world, hoping for a peaceful, small-town retirement.

“The appeal of Meaford was that it had a plan to stay rural, it didn't have an aspiration to become a Mexico City or Beijing,” Reid told council. “We wanted to be here because it had a plan. This proposal destroys that plan of Meaford. It completely takes it away. It's going to change the entire landscape of this town, and I hope people understand that.”

Other residents agreed. Area resident Alex Hector told Council that approving a six-storey structure in Meaford could be a slippery slope.

“I am in favour of the development in principle, but I do have an objection relative to the height exception. An imposing 82-foot building in the middle of a small community of one- and two-storey residential homes is just too much to ask for the people that live in the vicinity as well as those that live in Meaford,” Hector told Council, adding that if Council were to approve the requested Official Plan and zoning amendments, Meaford could see more requests from developers for high-rise buildings. “This is a slippery slope. Just imagine if a developer asks for the same exception on the Meaford Factory Outlet location. If we've approved six stories for peopleCare, you know the next one is going to ask for six stories.”

Hector and other residents who participated in the meeting pointed to other peopleCare developments in larger municipalities such as London, Ontario, where four stories has suited the needs of the company.

Resident Anita Hunter told Council that she felt the proposed development is over-sized for the neighbourhood, and she noted the challenges that such a tall structure would present for Meaford's fire department.

“We are in favour of the development, we're just concerned about the height,” Hunter told Council as she shared both her own concerns as well as those of friends who were unable to participate in the virtual meeting.

Residents who were able to participate in the virtual meeting also expressed concerns about the lack of greenspace included in the designs, particularly should a daycare centre be included as has been suggested in the planning documents.

Members of Council also had a number of questions for the proponent, ranging from the fate of some existing trees to the amount of parking proposed for the site, to the number of jobs that would be created both during the construction phase and once the facility was built and operating.

Though Mayor Barb Clumpus had indicated that peopleCare and its representatives would be given time at the end of the meeting to answer the many questions posed by residents and members of council, Pidgeon suggested that they would like to have some time to prepare answers which would be presented at a later date, potentially at a more publicly accessible meeting.

“There have been some very good questions that have been asked, and I think what we would like to do is take the questions away and come back with a more comprehensive response,” Pidgeon told Council. “We heard loud and clear what the priority questions are, and then some secondary questions that are certainly very important. And then somehow we have to figure out a way to present this information back. Some of the residents unfortunately were not able to attend (the virtual meeting) because of the technology I suppose that we are all dealing with, but we would like to provide a comprehensive response.”

Mayor Clumpus accepted the proponent's request to provide answers to the questions raised during the meeting at a later date.

“We are in very unprecedented times, and under normal normal circumstances this would have been a face to face (meeting), but we understand there's only one public meeting that is prescribed for these kinds of applications, and we'll have to do something a little different I guess, to follow up with this,” the mayor suggested.

Photo: A concept drawing of the proposed long-term care centre and retirement home on the former Meaford Community School property on Cook Street.