Stretch of Sideroad 4 to Get Paved Shoulders 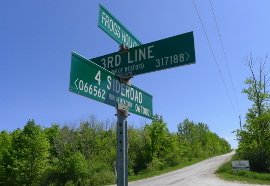 An 800-metre stretch of Sideroad 4, locally known as Frogs Hollow, between the Meaford-Blue Mountains Townline and the 3rd Line will have paved shoulders added during its upcoming rehabilitation.

While the paved shoulders will provide extra space for cyclists on that section of road, the compromise approved by Council falls short of the 1.5 metre wide cycling lanes that area cyclists have been lobbying council to install in recent years. Cyclists have told council that the hill can be a dangerous spot for both motorists and cyclists, as well as pedestrians who walk the stretch of road.

Meaford's Director of Infrastructure Services, Tori Perejmybida, told Council during their June 8 virtual meeting that the additional cost for paving the shoulders would be paid for through the project's existing contingency fund.

“At this time staff recommend funding the Contemplated Change Order through the $107,000 project contingency. Should further funds be needed due to unforeseen issues or Asphalt Cement (AC) price index fluctuations at the time of construction, the prior allocated funds from the Roads, Streetlights, Drainage, and Sidewalk Reserve Fund will be used,” Perejmybida told council.

Members of Council, who grappled with the issue as far back as 2016, were pleased to have a compromise to consider, however Councillor Ross Kentner questioned the quotation of $39,069.73 when Council has previously been advised by municipal staff that the construction of bicycle lanes could cost as much as half a million dollars.

“We've been led to believe all along that this was a/ impossible, and b/ a half a million dollar job, and it's come in at $39,000, and it looks like it is going to answer a lot of the desires that ratepayers have brought to our attention,” Councillor Ross Kentner told Council.

Municipal Treasurer Darcy Chapman responded to Councillor Kentner's comments by explaining that he was comparing apples to oranges.

“What you are getting a price for right now, is not what has been asked for in the past,” Chapman told Council. “What was originally asked for was a proper paved shoulder on both sides of the entire road.”

Chapman told Council that the original request was for cycling lanes, which must be 1.5 metres in width. Staff had previously issued a request for proposal to design bicycle lanes for the road, but Council rejected the request for $70,000 to fund the design phase.

“You're just putting asphalt on the side of an existing road bed, you're not actually building the road bed out. So, that's why it's completely different,” Chapman advised. “And we're doing 800 metres of the road versus doing the entire 2.7 kilometre stretch on both sides of the road, adequately engineered to make sure that it's actually a 1.5 metres wide platform. That's why it's completely different.”

Councillor Tony Bell sought clarification from staff that the paved shoulders would not meet the requirements of actual bicycle lanes.

“Do we or do we not have dedicated bicycling lanes (with this project)?” Bell asked staff.

Perejmybida confirmed that the paved shoulders would not be actual bicycle lanes.

Councillor Paul Vickers questioned whether this paved shoulder project would cause others to demand the same on other roads used by cyclists.

“The only thing I really have concern about is that if you go to the map of the Grey County cycling and trails needs, I realize that the 7th Line is in that same group. There's two awfully long hills. If you take the hill from Nighthawk up to Frogs Hollow, that is another very narrow hill that will cause a lot of problems, it's very steep, and I guess I worry that we're now setting precedent that we are going to start paving shoulders if they can get enough neighbours together to send enough emails, we will do their wishes,” Vickers said.