Municipality to Explore Potential For Security Cameras on Bayfield Street 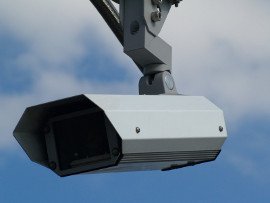 For a number of years Council has fielded complaints about the actions of some anglers along Meaford's Bayfield Street waterfront, and while the municipality has worked with the OPP, the MNR, and area residents, the complaints persist. At Council's June 8 virtual meeting, Councillor Harley Greenfield brought forward a motion asking staff to prepare a report outlining the potential for the installation of security cameras in the area.

“Therefore, be it resolved that the Council of the Municipality of Meaford directs staff to bring forward a report on the legal, privacy, technical, and financial implications of purchasing and installing security cameras and the appropriate signage to identify their presence along Bayfield Street in order to visually track the activities in the area,” read the final paragraph of Greenfield's motion.

Council has previously heard on a number of occasions about some members of the fishing community exhibiting bad behaviour, such as public urination, cleaning fish on sidewalks, and leaving the remains on shoreline boulders. The problems aren't new; they have in fact been on council's radar for a few years. There was even an attempt made in 2017 to ban fishing along the Bayfield Street shoreline, though that proposal was quickly abandoned after public push-back, and council opted instead to install portable toilets and to work with the OPP on enforcement.

With the issues persisting, Greenfield suggested that security cameras could help to identify those causing issues.

“I think everybody is aware of some ongoing problems down on Bayfield Street, along the waterfront, and the OPP have been informed about these activities on a number of occasions and nothing seems to be improving, so I brought this motion forward with the hopes that over a matter of time, and not too much time, it'll help clean up the situation there,” Greenfield told his fellow members of Council.

A number of concerns were raised by members of Council and municipal staff about the proposal including privacy, the requirement for signs advising citizens that they are being monitored, and cost.

“While I understand the potential desire of council to do something to try and mitigate issues, there's a couple things that council should be aware of before you vote on this,” Treasurer Darcy Chapman told council. “First and foremost, even if we could deal with privacy issues, we're going to have to post signage all over the parkland property saying 'you are under video surveillance', so we now end up with sign pollution. On top of that, I can tell you that in a confined space, being the new library building, where there are going to be eight cameras, with the required wiring just in that building, and the back end IT needed, that cost is $58,000. So you can imagine the cost to try and put video cameras all along our park in an open area where there is not readily available power.”

Chapman later suggested that the cost would exceed “six figures”.

Deputy Mayor Shirley Keaveney asked staff what other options might be available to the municipality in order to address the ongoing concerns on the waterfront.

“We can certainly look at other options through a report, but I will be bluntly honest, there are very few,” Municipal Clerk Matt Smith told council. “There was an alternative solution proposed to Council previously, which was to prohibit fishing along that area. Council will remember the community's outcry about that, and Council quickly decided they didn't want to have that bylaw in place. We have some powers under our parks bylaw, but for the sorts of behaviour that you are talking about, we would have to be staking it out. Our bylaw officers would have to be there, and see it, and that takes up an awful lot of time for what is a one-person issue.”

Smith referenced the reports of threats having been made to a resident of the street, and he suggested that is a police issue, not a municipal bylaw enforcement issue.

“We are not the police, we cannot enforce criminal law. So really, short of trespass orders, and trespass orders for a piece of park for a period of time are a very blunt tool that may or may not work,” Smith advised council.

Smith again suggested that the complaints being heard by members of Council are coming from one person, a suggestion that frustrated Councillor Greenfield, who told Council that while one resident is speaking on behalf of their neighbourhood, the complaints have been heard from more than just one resident.

Mayor Barb Clumpus told Council that she walks the stretch of Bayfield Street regularly and has never seen any of the issues that have been reported.

“That is a walk that I take probably four times per week,” Clumpus told Council. “I have never encountered a difficulty in that area. The fishermen have been respectful. I know there have been altercations with one individual who engages, and it seems to be a mutual altercation. I think we need to be very careful with this, because we are making a judgment call on the basis of one individual's complaints.”

In spite of concerns about the downside of installing security cameras in the area, Council voted in favour of having staff research the issue and provide a report to council so that the information is available for future consideration.

Ultimately council voted unanimously in favour of requesting a report from staff on the potential for the installation of security cameras in problem areas on the Bayfield Street waterfront.