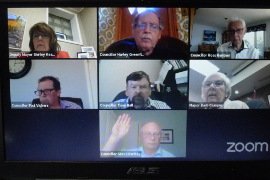 Meaford council received their latest COVID-19 emergency management update during their May 25 virtual meeting. With the gradual easing of restrictions in Ontario, the municipality has been able to begin re-opening some municipal services such as the boat launch and dog parks. Council agreed with a staff recommendation that it is time for everyone to use bag tags again.

“On May 14, 2020, the Province announced the commencement of Phase 1 for the re-opening of Ontario, effective May 19, 2020. Further, the Provincial Emergency Orders were extended till June 2, 2020, on May 12, 2020 by Cabinet,” CAO Rob Armstrong told council in his report. “Phase 1 does permit some municipal facilities to open such as tennis courts, dog parks, and boat launches. With regard to campgrounds, this only applied to those that provide seasonal sites and therefore does not apply to Memorial Park.”

Armstrong told council that there are a number of factors that must be considered when re-opening municipal services, as new distancing and cleaning requirements must be met under guidelines set out by the Province and the public health unit.

Members of council were eager to learn when various municipal facilities might be ready to re-open. One municipal facility of particular concern was the marina, which would typically be filled with boats at this time of year. However council was told that the facility won't be ready to re-open until July 1. A planned renovation of the harbour house, along with other work, was delayed due to the province halting all construction projects for a period of six weeks in response to the COVID-19 outbreak. As a result, the project, which was to have been completed by the end of May, will now be completed by the end of June. Currently there is no power or water available at the site, though staff is working to facilitate day use of the facility temporarily.

While the marina's re-opening is delayed, the municipal boat launch has re-opened, allowing boaters access to the bay.

Staff recommended that council approve the termination of the temporary measure which allowed residents to place one bag of garbage at the curb for pickup without a bag tag. The intention of the measure had been to ensure that those who were unable to leave their homes to obtain bag tags due to periods of self-isolation would still be able to have their garbage collected. Many residents have taken advantage of the ability to dispose of a bag for free each week.

“Maintaining a free bag tag for anyone who chooses not to tag the first bag costs the municipality up to $2,500 per week in lost revenue. The intention of the bag tag fees are to recover costs related to the disposal of waste,” Armstrong told council. “Should the bag tag continue to be waived the general tax base will be required to fund any shortfall within the waste management budget.”

Armstrong noted that other municipalities, including neighbouring Owen Sound, which had temporarily allowed for the collection of trash without tags, have reinstated the bag tag requirements. Some other municipalities did not offer the waiving of the bag tag requirements but instead worked to ensure that bag tags could get to residents even if they were in self isolation.

Members of council agreed with and approved the recommendation of staff to reinstate the bag tag requirement as of June 1.

“I think it is time to march on, and the program was probably getting abused a little bit,” Councillor Vickers noted. “As much as nobody likes to pay for bag tags, we do have to look out for the municipality and realize the lost revenue.”

“Since April 24, 2020, an Economic Recovery Support Team as defined in the Covid-19 Economic Recovery for the Municipality of Meaford Project Profile, has been meeting weekly. This collaborative team consists of community-centered individuals who offer subject matter expertise in a variety of local economic areas and who are identifying initiatives that include: programs, services and resources to transition businesses through the changing phases of the pandemic,” Armstrong told council. “The team’s recovery efforts have already put into action promotional material to support shopping local, and the creation of an eCommerce Assistance Program to support businesses in achieving an internet presence to sell their products and services. A Memorandum of Understanding for the eCommerce Assistance Program is required to administer by the Chamber of Commerce with funds from the Municipality. The municipal funds through the repurposing of funds that were contained in the Strategic Initiatives budget.”

Council unanimously approved the recommendation to fund the program up to $5,000. The funds provided by the municipality would help fund ten businesses in establishing e-commerce capabilities.

Council was also advised that, of Meaford's 6,700 ratepayers, 190 property owners have arranged to utilize the municipality's tax deferral measure implemented as a result of the pandemic.

“The Municipality currently process about 6,700 tax bills annually. Following Council’s decision to allow the deferral of the April tax instalment, approximately 190 property owners took advantage of this option (2.8%), with the remaining properties paying on the previously determined due date at the end of April,” Armstrong advised council. “By taking a blanket approach to interest and penalty deferral, the 190 property owners mentioned above received the benefit required. It should also be noted that there were also about 750 existing accounts previously in arrears that also benefited from the interest holiday, even though these accounts were not paying prior to the COVID outbreak.”