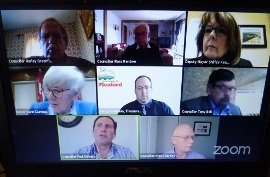 With stay at home and social distancing orders continuing in the province due to the global coronavirus outbreak, Meaford's council held its second virtual meeting on Monday, April 20, in which they received an emergency management update from municipal staff.

As of Monday's council meeting there were 63 confirmed cases of COVID-19 in Grey-Bruce, with just one in Meaford thus far. While the number of cases in Grey-Bruce remains low compared to many highly populated areas, officials continue to encourage residents to stay at home, and to practise social distancing when they must leave their homes to purchase essential goods like groceries and medications.

During council's virtual meeting on Monday, CAO Rob Armstrong provided a comprehensive update focused on how Meaford has responded to the state of emergency, and also the weeks and months ahead.

“As events started to unfold in mid-March surrounding the spread of COVID-19, the Emergency Control Group (ECG) convened a meeting on March 16, 2020, at the fire hall to consider actions the Municipality should take to assist in curtailing the spread of the disease and ensure the appropriate measures were put in place to protect staff and the public. At this meeting it was decided that the Municipality would immediately cut back on services, limiting the delivery of services to those that were determined to be essential, or could be delivered remotely,” Armstrong told council in his report. “On March 24, 2020, the Mayor, with the full support of the ECG, declared an Emergency under the Emergency Management and Civil Protection Act. This followed the declaration of an Emergency by the Province on March 17, 2020. Since that time, all Grey County Municipalities and the County have declared an Emergency.”

On April 14, the province extended the state of emergency an additional 28 days until May 12.

Due to the ongoing state of emergency, staff made a number of recommendations to council, including the deferral of the second instalment of tax payments due on April 28, to June 29. Staff also recommended that council approve the deferral of pre-authorized payment plans for the months of April, May, and June upon request from a property owner. Additionally staff recommended that council waive penalties and interest on property tax and water bills through June.

Staff also recommended the postponement of a number of projects that had been planned for this year.

Council unanimously approved the staff recommendations included in the report.

Members of council who participated in Monday's meeting from their homes, with the exception of the mayor who was in the council chamber, had a full discussion about the measures taken to date, and those that would be taken in the weeks to come. Joining members of council for the meeting were a number of staff including the Clerk, CAO, and Treasurer.

Among the top concerns of members of council was the impact that the emergency is having on local businesses.

“This time that we are going through for businesses, this municipality will see businesses close. They will suffer financial loss, it will be a great impact, and we all know this,” Councillor Tony Bell noted.

Deputy Mayor Shirley Keaveney shared Bell's concern for businesses in the municipality. “It's difficult enough to run a business in Meaford, let alone the impacts of COVID-19,” Keaveney told council.

The Deputy Mayor told council that she has seen estimates that as many as 42 percent of businesses will not reopen after the state of emergency, and that half of all restaurants will not reopen.

“Those are really scary statistics that will have an impact on Meaford as well,” Keaveney noted.

Meaford Treasurer Darcy Chapman assured council that the municipality is in healthy shape financially and will be able to meet the needs of the municipality throughout the state of emergency.

Absent from Monday's council meeting agenda was the highly anticipated report regarding the proposed pumped storage facility on the Tank Range. Councillor Ross Kentner pressed staff to explain why the report has yet to be made public.

“I would really appreciate it if we could have a date when council is going to receive our CAO's report on the Trans Canada Energy pumped storage facility,” requested Kentner during the meeting.

CAO Rob Armstrong told council that staff is aware of the public interest in that report, and they anticipate a full council chamber when the report is released along with dozens of residents who want to provide their own comments. Given the current restrictions on large public gatherings, and that the commenting deadline is currently the end of July, staff is hoping to delay the release of the report until full public engagement can be accommodated.

“One of the things we are challenged with right now is bringing a report forward to council without the opportunity for people to engage with council,” Armstrong said.

Armstrong told council that he has been in communication with members of local activist group Save Georgian Bay to explain the delay in the release of the report. Staff noted that there is an expectation that, given the current state of emergency, the DND would be again extending the commenting deadline beyond July 31.

“We are on hold, but I have promised that no matter what, if the deadline doesn't get extended we would bring a report in time for the July 31 deadline,” Armstrong told council.

Council's next virtual meeting is scheduled for Monday, May 10.