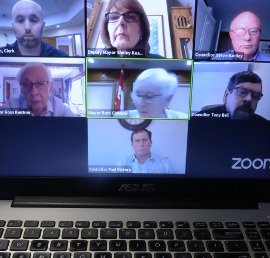 With the current COVID-19 pandemic having caused extreme precautionary measures including a prohibition on gatherings of more than five people, Meaford's council has not been able to hold council meetings, but that changed last week when for the first time ever Meaford's council met digitally.

Council met on the afternoon of Thursday, April 2, each from their own home or office, and the meeting was streamed live online. The only agenda item for the meeting was to pass a bylaw that would allow future electronic meetings during the state of emergency. In addition to the seven members of council, the municipal Clerk was the only other participant in the meeting.

Some have expressed concern about municipal councils holding electronic meetings, particularly as it can be difficult to incorporate public participation.

“The new legislation does not change the Municipal Act’s open meeting requirements. In the light of the provincial orders about public gatherings, which prohibit organized public gatherings of 5 or more people at the time of writing, staff have consulted with the Ministry of Municipal Affairs, AMO, and local municipalities as to how to ensure that Council meetings held electronically are in accordance with the Act. In order to comply with the order, the Council Chambers will be closed to the public,” council was told in the report. “At this stage, staff recommend that meetings be live-streamed on the municipal YouTube channel, the same location as our regular live-stream. Elements of public participation, particularly deputations on agenda items, will be included in the agenda. Members of the public will be asked to provide deputations in writing to the Clerk in advance of the meeting. Should any be received, the Clerk will read them out at the appropriate point in the agenda.”

While council unanimously approved the bylaw allowing for electronic meetings, they won't return to their normal meeting schedule.

“In the short term, Council meetings will be scheduled based on urgent need for the passage of by-laws, or if the Emergency Control Group has requested input from Council about matters related to the current state of emergency,” council was advised. “The number of items on the agenda will be limited in order to ensure that meetings can run successfully, and to reduce the impact that restricted public participation has. Should the current situation go on for an extended period, staff will bring forward additional, non-urgent, matters as and when appropriate.”

Thursday's digital meeting lasted just 20 minutes, council was pleased to be getting back to work, even in a limited capacity.

“I want to give a big congratulations to the team for setting this up, it's phenomenal, and when we get back to normal I will never take a regular council meeting for granted again,” noted Councillor Steve Bartley near the end of Thursday's digital meeting.