As Commenting Deadline Nears, Questions Raised Over Email From Mayor to TC Energy 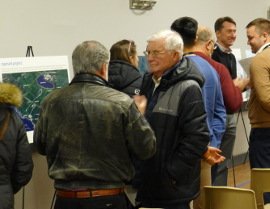 Those wishing to offer input about the proposed hydroelectric pumped storage facility on the Meaford Tank Range have just over a month to do so. The Department of National Defence is seeking comments from various stakeholders including residents of the municipality until March 31.

TC Energy has been granted permission to undertake a feasibility study, and the temporary access agreement provides TC Energy with one year of access in order to complete its studies. The DND is conducting its own study, which will determine if the proposed facility could co-exist with activities at the 4th Canadian Division Training Centre, and as part of that process they are seeking input from the community.

According to TC Energy, the proposed hydroelectric pumped storage facility would “consume inexpensive off-peak power at night to pump water from Georgian Bay into a storage reservoir located at the top of the Niagara Escarpment on 4th CDTC property. The reservoir would be emptied back into Georgian Bay during peak usage periods, driving hydraulic turbines to generate electricity.”

TC Energy has stated that the proposed project would cost roughly $3 billion to build the facility.

With the initial commenting period drawing to a close, some residents have expressed concern about early communications between Meaford Mayor Barb Clumpus and TC Energy representatives.

An email dated March 7, 2019, from Mayor Clumpus to a TC Energy representative has been circulating on social media in recent days. In that email Clumpus appears to express support for the proposed project.

“Thanks for checking in yesterday – and for asking my opinion regarding alerting the County about your project. That was greatly appreciated and I know Kim and Selwyn will be as excited as we are with your news,” Clumpus wrote to a TC Energy representative on March 7, 2019. “Further to our discussion about our priority setting exercise coming up on March 18, nothing will be mentioned until I have something to mention!!!! If the letter comes in beforehand, I'm happy to share this exciting news, however I do understand and appreciate the sensitivity around the possibility of this getting out before the other parties are ready. We're happy to have the copy of the economic impact study from Napanee to anticipate what could happen here. Again, many thanks for being so thoughtful and forthright. We are thrilled to be included in this partnership. Take good care.”

While some residents have seen the early communication as both an attempt to hide the proposal from the community as well as a sign that the mayor is supportive of the project, when asked by The Independent for comment about the email, members of council were generally supportive of the content of the email.

“As Deputy Mayor I was unaware of T.C. Energy's interest in a project here until June 17th when members of council were invited two or three at a time to hear a presentation from T.C. at Meaford Hall. I understand Mayor Clumpus was instructed when she was first informed not to share this news until DND had granted permission to TC for the one year opportunity to explore the feasibility of their project,” noted Deputy Mayor Shirley Keaveney.

Councillor Harley Greenfield suggested that the mayor's email was a standard response given the situation.

“As for the mayor's March 7 e-mail, I do not find it out of line, except using the word 'partnership' does suggest the municipality and the County were enthused by the proposal,” Greenfield told The Independent. “Considering our need for development and the accompanying job prospects, I cannot imagine that the mayor or any Council member receiving news of this potential project would dismiss it and not show a desire to accept the possible future advantages. For opponents of the project, certainly they can read into the e-mail a number of different interpretations, especially around the word 'partnership'. However, I am certain the usage of that word by the mayor meant a possible 'future' partnership, and not a 'done deal' as of last March.”

Councillor Steve Bartley told The Independent that he wasn't surprised at the mayor's letter, as when he first heard of the proposal his initial thoughts were of potential benefits to the community.

“I was unaware of the March letter. Not that it would matter as when I was notified in June all I could think about was how this was good for the municipality,” Bartley told The Independent. “Not until the Georgian Bay group brought their concerns forward did I think about the adverse effects. I must also say that I have had many people say this will be a good thing.”

The language used by the mayor in her March 7, 2019 email was also not of concern for Councillor Ross Kentner, who suggested that use of terms like 'partnership' is common when new developments are proposed.

“In my view such language is quite common in the early stages of any significant development and is more about being welcoming and enthusiastic than about any sort of formal commitment,” Kentner suggested. “The mayor's email was drawn to my attention by Save Georgian Bay. Obviously I wasn't pleased but, in hindsight, it is probably a good thing that we have had an opportunity to witness the unfolding opposition to TCE's pumped storage facility. Otherwise, we might have embraced the proposed project prematurely and not given other matters the attention we did in our strategic planning exercise.”

Councillor Paul Vickers declined to comment on the mayor's email.

“I think I will let the mayor respond to the letter. It was her letter and she should have to justify her responds and I will not try and make a comment for her,” Vickers responded to questions from The Independent.

Mayor Clumpus told The Independent that her March 2019 email to TC Energy was not an endorsement, nor a commitment, but rather a friendly reply from a mayor.

“I first heard from TC Energy in February, 2019, with a request to meet about the possibility of a proposal coming forward through the DND,” Clumpus explained. “One of the responsibilities of the Mayor is to welcome potential new investors to our community, and I do so frequently, in confidence and without prejudice. I was intrigued about the possibility of a $3B investment in our community. At this early stage with no details provided, I saw a potential positive impact on our local economy. Any potentially negative consequences evolved in time as more information became available.”

Clumpus also noted that while a top priority of council is economic development, the mayor and staff encouraged TC Energy to engage with the community.

“Economic Development is a priority of this Council, and something I have always strongly supported. TC Energy entered into an access agreement with the DND in May of 2019 and provided formal notice to the Municipality of that agreement in June. As a Municipality, we are required to follow the lead of the Federal Government's consultation process and wait for formal communication,” said Clumpus. “Because this proposal is on federal land, the Municipality has no decision-making authority and TC Energy had no requirement to provide us with any notice, so we were appreciative that they did so as a courtesy. From the beginning we encouraged them to conduct thorough public consultation with our community as they worked through this initial feasibility study.”

In spite of how her early communications with TC Energy might be characterized, Mayor Clumpus said that she shares many of the concerns expressed by residents.

“Over the past several months I have received extensive feedback, both supportive and negative from engaged residents, as well as conducted my own research into pumped storage technology and the impacts of similar projects in other communities,” Clumpus told The Independent. “I have heard and share the concerns that have been raised about the potential impacts to our environment, our property owners, our water quality, our tourism industry, and so much more. There are many questions that remain unanswered, but the commitment from the municipality is to continue to receive comments and to conduct our own research on the impacts of this proposal. I encourage everyone in our community to continue asking questions and voicing concerns about this proposal, and to keep reaching out to myself, your Council, the DND and of course TC Energy with your feedback.”

Those wanting to offer input or opinions about the proposal can send an e-mail with your feedback to Holly King, Section Head, Directorate Real Property Services, DND, at ThirdPartyAccess@forces.gc.ca.