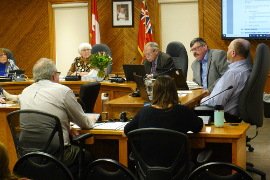 A number of residents participated in the public questions portion of Monday's council meeting in order to express their opinions about a proposed energy storage facility on the Meaford Tank Range.

After listening to the residents, councillors themselves opened up about their thoughts on the proposal which is currently undergoing feasibility studies.

Mayor Barb Clumpus was the first to share her thoughts on the issue.

“Thank you to all of you who have taken the time to do the research that you have, and to offer your comments, and to attend the public meetings held by TC Energy. Certainly our concerns mirror yours, we are certainly very much aware of the environmental issues, the impact on our community, on our residents, on our clean air, clean water, Georgian Bay, the social impacts of this project should it ever become feasible. At this stage it is just that, an idea that is going through a feasibility study,” noted Mayor Clumpus. “As it sits right now, it is an idea. Once it gets through the feasibility stage as you all are aware, it will go into many environmental assessments, and once that is completed, we have committed then, at that time, to engage a peer review of those environmental assessments.”

Clumpus stressed that while she and her fellow members of council all have concerns, it is too early for council to take any official position on the proposal.

Councillor Tony Bell sought to ensure residents that council is paying attention, and that they are listening to the public.

“Anybody who knows me, knows that I believe deeply in the public voicing their opinion. I want to also say that living in this country that we do, freedom of speech is paid for dearly almost every day,” said Councillor Bell.

Bell read from a list of key words that he has been maintaining as he has heard or read the views of residents. His list of key words included many of the primary concerns that residents have expressed in recent months after learning of the proposed pumped storage project.

Councillor Steve Bartley also expressed concerns while noting that he has yet to take a position on the proposal.

“I'm going to state my position on this: I don't have one. This was given to me on June 17, that there was something possibly going to happen, and that it would be three years before they'd make a decision. At that time I could see several things that could help the municipality greatly, but I need time. I have contacted our MP, I've had a meeting with him, and he is going to push the Department of Fisheries and Oceans so that there is zero fish lost. If there's a fish lost, I want two put back in, I don't know. He's pushing it from that side. I've contacted my MPP, because if you think for a minute the MNR (Ministry of Natural Resources) or the DFO (Department of Fisheries and Oceans) are going to allow something to kill fish, I think you're mistaken, I think they are bigger than TCE,” said Councillor Bartley. “Having said that, I do not have a position because there is too much more to learn here, and I'm going to try and do it in a quick time.”

Councillor Harley Greenfield suggested that residents who oppose the proposed facility should be looking to Ottawa for help.

“Thanks to Save Georgian Bay for all of their efforts over the past few months. As of yet, I haven't heard many answers from TCE, and I don't think many have. We are being patient, we do expect and trust that these answers will come forward; they (TCE) had better do a lot better than they have the past few months. This is a proposal by a huge company, and TCE, in spite of their environmental record, they've been successful, they've made money, that's what they're in business for, and that's why they are putting this proposal forward,” said Greenfield. “The Department of National Defense: I'm absolutely disgusted with them for even accepting this suggestion from TCE. This is federal land, this is a project on federal land. I've been asked by some of the Save Georgian Bay people, what can we do? Where can we go to ask for help? Well, I may be going a little outside the envelope, but we have a gentleman in Ottawa who claims that the is one of the top environmentalists, not only in our country, but the world. He is the head of our armed forces. Back in 1970 or thereabouts, his father commanded the armed forces to march into Quebec City, and Montreal. If you are looking to go to somebody for help, you might as well just start right now, go to the top.”

Greenfield noted that he too has been keeping a list of key words to keep in mind as he sifts through information about the proposal. Like Councillor Bell, Greenfield's list of key words has been generated from comments he has heard from the public.

Councillor Ross Kentner was blunt in his assessment of the situation.

“I spent my life in a regulated industry, and I have to tell you that the cards are stacked against us as the public. I feel very badly that we're not in a position to, in my view, have any influence with DND, and they seem to forget where that land came from. It came from people who worked the soil in this part of the world for generations,” said Kentner. “The one bright light, and the place that I think we should start lobbying as a community is with SON (Saugeen Ojibway Nation). I have some friends there who tell me they will be very surprised if SON will support this, so I think we should be lobbying with them as well.”

Deputy Mayor Shirley Keaveney expressed gratitude for the work being done by the Save Georgian Bay group, and she said that, like many, she too has some serious concerns about the proposal.

“I want to express appreciation to Save Georgian Bay, and in particular the folks that have taken the time to come and meet with me and share their learning and listen to my concerns and to come to a mutual understanding that we do all have major worries about the health and safety of our Georgian Bay,” said Keaveney.

Like his fellow councillors, Paul Vickers has concerns about the proposal, though he agrees with Councillor Greenfield that the community should be lobbying the prime minister.

“My thoughts over the last few months, I've done a lot of thinking about it like everyone else has, and it certainly does scare me. What are the final implications? I wish somehow that I had a crystal ball that I could look into and see what it would look like in eight years, after the project is completed, what would it look like. How will it affect the fish, how will it affect the residents, how will it affect the people who want to visit our community? Will it affect it? Will the community be pretty much the same as it is now? These are all questions that I have,” said Vickers. “I agree with Councillor Greenfield that a lot of this does come from the top, and the top is the prime minister.”

Vickers also had some words of advice for the community.

“I never stand in front of a train that I fear that I can't stop or survive, and this is one train I'm afraid that we cannot stand in front of, and it's unfortunate. Having said that, we have to recognize that we as council and staff have to negotiate if this does go through. So to just jump up and down and say we are opposed to it, and we want no part of it, I don't know if that's the wisest move as council and staff,” Vickers noted. “So I do think we have to keep in mind that people have the right to oppose it, and to protest against it, I wish you the best. I'm still trying to sift through all of the information that's coming forward, some of it I'm not sure is that truthful. We can all find reports on the internet to oppose anything. I'm still trying to navigate through that whole mess of information.”

CAO Rob Armstrong explained that staff will be presenting a report to council at the beginning of March that will highlight the concerns of the municipality with the proposal, and he added that staff will work with the Save Georgian Bay group as they develop the content of that report. Members of Save Georgian Bay have been doing extensive research and have been engaging with the community in order to raise awareness about the proposed energy storage facility.

Those wanting to offer input or opinions about the proposal can send an e-mail to Holly King, Section Head, Directorate Real Property Services, DND, at ThirdPartyAccess@forces.gc.ca with your feedback.