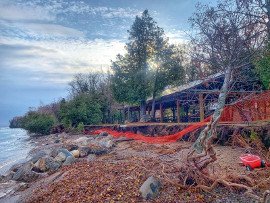 At their January 13 meeting, Meaford's council was provided with an update on the shoreline erosion the municipality has been experiencing in recent months due to elevated water levels in Nottawasaga Bay.

Meaford CAO Rob Armstrong submitted a seven-page report to council that highlighted the shoreline issues facing the municipality and its residents.

“Following a major storm event on October 31, 2019, staff convened the Emergency Control Group to discuss the impact of the event and related actions that should be undertaken. Emergency Management Ontario was contacted and we entered a period of Enhanced Monitoring to assess emergency needs,” Armstrong told council in his report, adding that the most recent storm event has not caused any additional damage as far as he is aware.

In response, a number of action items were undertaken including:

1. An on-line form was created to develop a database of individual property owners impacted by the erosion.

2. The municipality ordered sandbags and distributed them at the Operation Centre at the 7th Line. They also provided a load of sand for those that wished to fill their bags. Approximately 4,500 bags have been distributed to date. It was important to also advise the residents of the appropriate used of sandbags to ensure their effectiveness. A flyer was developed in this regard.

3. Municipal staff commenced discussions with various authorities, ministries, and departments on the scope of approvals necessary to undertake emergency works that included in-water works. Staff were advised that were no provisions for emergency works, however they would work with the municipality to expedite the permits to the best of their ability. It is noted that the earlier works identified in report INF2019-03 and the initial retaining wall remediation at Memorial Park was not considered in-water works and only required approval from Grey Sauble Conservation Authority.

“Following these actions, staff considered additional impacts from erosion and related works that were necessary to protect infrastructure. In addition, an area of Fred Raper Park was fenced due to the significant debris that was scattered amongst the park as a result of the significant waves,” Armstrong told council.

The following is a list of additional or proposed works that were initiated as a result of this assessment:

1. Additional shore protection works along the retaining wall in Memorial Park that consists of adding boulders in front of the previously repaired wall. The majority of this work was completed on December 18 by Knott Excavating. There is some additional remediation work to undertake in the spring.

2. Shore protection works in the vicinity of the pavilion in Memorial Park to protect the structure and the watermain that runs between the pavilion and the shoreline. This work was substantially completed by December 18th, however will also require some additional remediation work in the spring.

3. Applications to the federal Department of Fisheries and Oceans (DFO) and the provincial Ministry of Natural Resources and Forestry (MNRF) were made for additional protection works along Lakeside Ave. and Lakeshore Road South, in addition to works on the lands at 179 and 190 Grant Ave. to protect the municipal waterline on their property. This work is expected to occur once permits are received.

4. A meeting was held at the Town of The Blue Mountains office on December 23 with the Grey Sauble Conservation Authority to discuss messaging to residents who are looking to obtain approvals for erosion control works on their property.

Armstrong also told council that staff has had difficulty in getting help from the province.

“Following lengthy discussions with the Province, it was determined that the Municipality would not qualify for funding under their programs due to the extremely rigid criteria that is in place. This includes the fact that the total cost to the Municipality must exceed 3% of own source revenues, which totals approximately $454,000. The program is for works that are demonstrated to be a like for like replacement and must be linked to a single event. In this case, it was multiple storms that resulted in erosion impacts and the unreasonableness of the Municipality being able to prove that the proposed erosion control works were replacing existing shoreline protection exactly,” Armstrong noted in his report.

“It is staff’s intent to raise concerns with regard to the Municipal Disaster Recovery Assistance program through the local MPP,” Armstrong told council. 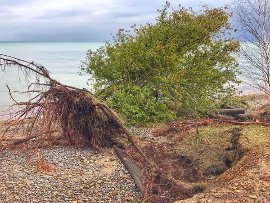 The erosion issues have caused problems at Memorial Park as well as other municipal properties.

“Work that was undertaken at Memorial Park was limited to those areas that were threatening infrastructure or existing campsites. Consideration will be given to restoring access to the water when conditions are favourable to do so and as part of the Memorial Park Master Plan,” Armstrong told council. “The Municipality is also participating in works on the residential property immediately west of the park (190 Grant Ave). This is on the basis that the erosion is close to impacting the Municipal waterline that supplies the park. No permits for this work have been issued at this stage.”

Currently surrounded by orange snow-fencing, Fred Raper Park will undergo a clean-up in the spring to remove debris that has washed up into the park, burying the playground equipment in a mass of gravel and rocks.

“In the spring of 2020, the Municipality will commence the clean-up of the waterfront park area, consisting of Fred Raper Park, waterfront along Bayfield Street to the Museum, and David Johnston Park. A subsequent report will be brought forward to Council on the long term use of the playground equipment as it relates to the ongoing impact from debris,” Armstrong told council.

Municipal properties aren't the only ones impacted by the high water levels; residential property owners are also experiencing erosion issues on their properties.

“Following the meeting at the Town of The Blue Mountains with the Grey Sauble Conservation Authority, it was agreed that the best course of action was to develop FAQs, similar to what the Municipality of Meaford has already completed. The FAQ which explains the process to undertake remediation works on their property. Unfortunately there is no available funding for private residents to undertake this work,” Armstrong told council.

Other areas of concern highlighted in the report to council include Lakeside Avenue and Lakeshore Road South.

“As part of the permitting process, the Municipality was required to provide notice to the adjacent property owners of the proposed works. Staff received concerns from some property owners with regard to the extent of work. This included concerns with limiting access to beach at west end of Lakeside, concerns with blocking of storm water pipe along south side of Lakeside and concerns with drainage ditch at west end of Lakeside being blocked by sediment and flooding adjacent property on Eliza Street. In this regard, staff modified the scope of work based on the feedback received and monitor situation. The Municipality is not proceeding with any work on the beach at the east end and work at the beach access at the west end would be limited to protecting the drainage ditch outlet. Access to the small beach at this point will not be cut off at this time, but the situation will be monitored to ensure no further erosion occurs to the road in this location,” Armstrong told council. “One concern on Lakeside that is being monitored is ice build-up on the road. As the waves crash against the rocks and splash onto the road, ice tends to accumulate quite rapidly on the road service. So far this has not presented a significant problem, but should conditions change, it may become more difficult to maintain the road. The Municipality is still awaiting the permits to undertake this work.”

“Permit requests for additional works along Lakeshore Road South have been submitted and staff have received a letter of advice from DFO. We are still awaiting permits from MNRF. In addition, staff met with the Residents Association to review the works,” Armstrong advised.

Work to repair damaged properties along the shoreline won't be cheap. Armstrong provided council with a list of required repairs and rehabilitation along with estimated costs amounting to hundreds of thousands of dollars of required work.

“As noted in report INF2019-03, remediation work has been completed as emergency work and was not included in the 2019 budget allocation as there has been no historical need for completing shoreline work to protect municipal infrastructure along roadways in Meaford,” Armstrong told council.

The additional work undertaken since the last report, which highlighted costs of $49,565.20 to remediate a portion of the retaining wall, is as follows:

Estimates are still be prepared for the additional road works at Lakeside and Lakeshore with Request for Quotes being issued once permits are available.

The Memorial Park works will be funded from the following sources:

All remaining expenses to be incurred in 2020 will be funded out of general operating accounts within the Water and/or Memorial Park budgets.

Councillor Harley Greenfield reminded council that the high water levels being experienced today are likely to be with us for years to come, making it one of the most pressing issues facing the municipality.