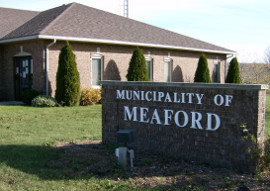 The Municipality of Meaford has joined hundreds of other Canadian municipalities in declaring a climate emergency.

“I've been involved with many arguments, many debates, whether climate change is real or not,” Bartley told council. “I believe it is real, and I would not want 20 years from now to say I made a mistake, it is real, but it's too late. So I have brought this motion forward so that our municipality, like I think 800 other municipalities across the country have brought it to the forefront, and I do believe this municipality is already partaking in this, it just puts it in black and white that we'll follow a better motion for climate change.”

Councillor Bartley's motion was well received by most members of council, however Councillor Harley Greenfield had another perspective that he wanted to share with his fellow council members.

“I'm going to put on my old white male hat, and likely take some criticism for doing so,” Greenfield told council. “First of all I want to say there's no doubt about it, our climate is changing. Fifty-year storms we used to have every 50 years now come every one year or more often. Last July we had according to my records, seven days where the temperature was over 35 degrees Celsius. Now whether you read it in Celsius or Fahrenheit, those were hot days. So the extremes are there, and they are more often. May and June were cooler and wetter than usual.”

While Greenfield acknowledged the reality of climate change, he took issue with the terms 'crisis' and 'emergency'.

“I can't support this because I see the terms 'climate crisis' and climate emergency', I fully accept climate change, but I cannot accept that we are in a situation that is a climate crisis or a climate emergency. Canada, although the second largest land mass in the world, is responsible for less than two percent of carbon emissions. China, India, Russia, even the United States, our neighbour to the south, they are the ones that are causing the problems,” Greenfield said.

In spite of Greenfield's objection to the terms, council voted in favour of the motion.

The full text of the Climate Crisis resolution approved by council is below:

Whereas, the Intergovernmental Panel on Climate Change (IPCC) has determined the need for a significant and structural reduction in carbon emissions in the next 11 years to avoid further economic, ecological and societal loss; and

Whereas, municipalities across Canada and Ontario are acting on climate change, with many having declared a climate emergency; and Whereas, climate change solutions not only reduce carbon output, but they also offer multiple benefits including improved health and air quality, greater community resilience, economic development and reduced costs; and

Whereas, the Municipality of Meaford is already experiencing large and rising costs and risks from climate change impacts such as extreme weather, flooding and severe winter events; and

Whereas, the Municipality of Meaford has established an Energy Conservation and Demand Management Plan including the commitment to reduce Municipal consumption of fuels and electricity in all municipal operations by an average of 1.5% per year between January 1, 2019 and December 31st, 2023 for a total 7.5% decrease over this period;

Now therefore be it resolved that the Municipality of Meaford officially declare a climate emergency for the purposes of naming, framing and deepening our commitment to protecting our economy, our eco systems and our community from climate change; and

That in response to this declaration, Council direct staff to communicate existing policies and programs designed to reduce carbon emissions in the Municipality; and

That staff be directed to bring forward a report investigating actions that can be undertaken within our municipal mandate and the resources required to put such actions in place in an effort to combat climate change; and

That a copy of this resolution be forwarded to the Premier of Ontario, the Ontario Minister of Environment, Conservation and Parks and Minister of Government and Consumer Services, the Association of Municipalities Ontario, MPP Bill Walker, and MP Alex Ruff.