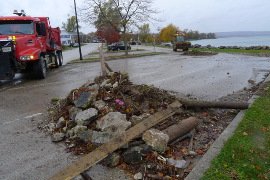 Another windstorm battered Meaford's shoreline on Thursday, October 31. It was the second storm in as many weeks to bring with it high waves that forced their way over the banks and onto roadways along the waterfront.

The municipality reported that as much as ten feet of shoreline disappeared overnight after the October 31 storm.

Municipal crews were kept busy inspecting and clearing debris from municipal waterfront properties like Fred Raper Park and Memorial Park, where a deteriorating retaining wall has been made worse by the two recent storms. 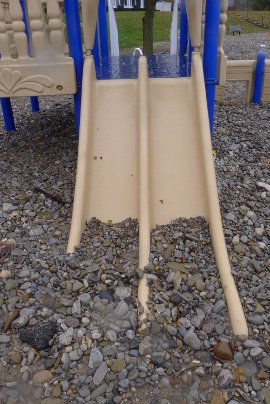 Fred Raper Park was hardest hit of the municipal properties, where water rushed more than 40 feet through the park, depositing as much a foot deep of debris that included rocks, sand, and logs.

As a result, Fred Raper Park will be closed for the winter.

“Due to this damage, Fred Raper Park will be closed until a full cleanup can take place in the spring of 2020. Shoreline areas of Memorial Park and David Johnston Park will also be fenced off to limit access to damaged areas,” said the Municipality in a press release.

The Municipality has begun working with the provincial government to review the damage and potentially access funding for the repair work.

“This year’s high water and has caused significant changes to our shoreline,” said CAO Rob Armstrong. “We have incurred damages, and now infrastructure such as the Memorial Park Pavilion, washrooms at Fred Raper Park, and waterfront roads are very close to the water’s edge, and could be damaged in future storms. We want to do everything we can to protect our vulnerable areas and get them restored.”

Deputy Mayor Shirley Keaveney noted that it's not just municipal properties that have been impacted by these recent storms.

“In addition to our beautiful parks, we’ve also heard from waterfront homeowners who have experienced damage,” said Deputy Mayor Shirley Keaveney. “It can be stressful and heartbreaking to have your home damaged, and to worry what future storms may bring.”

The Municipality asks that waterfront homeowners who have experienced property damage please complete the online form at https://forms.meaford.ca/Waterfront-Private-Property-Damage, or call 519-538-1060, to provide your information. This will allow the municipality to provide waterfront homeowners with updates, and information on any funding opportunities that become available. 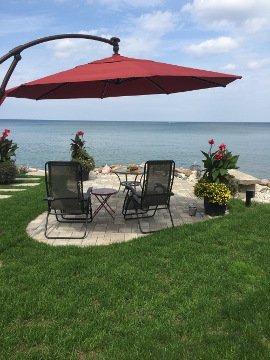 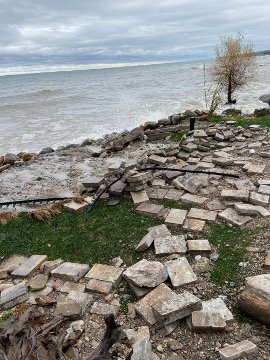 Meaford Independent reader Fran Gilas submitted these before and after photos of her patio area at her waterfront home.