New Community Policing Advisory Committee Wants to Hear From You 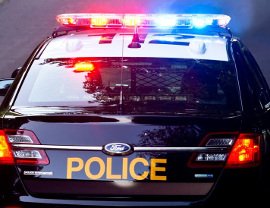 Formed in April of this year, Meaford's new Community Policing Advisory Committee has been settling in to their new role, and they are hoping to hear from members of the community.

The committee consists of four citizen members along with one council representative. The committee meets four times a year, and their role is to advise the Meaford OPP detachment and Meaford council on policing issues.

During a recent interview with three of the committee's members The Independent was told that the committee wants to engage with residents, and they are hoping that a new email address dedicated to policing concerns (policing@meaford.ca) will make it easy for residents with concerns to get in touch.

“As a committee, our focus is to engage with the (OPP) Inspector, and to have conversations with him about things that we see and hear, things that people in the community let us know about, so we can make the Inspector aware of things that may be going on in places that we think we should bring to his attention,” said Tony Bell, council's representative on the committee. “Then the Inspector can assign his resources accordingly. So we're a liaison between the folks in the municipality and the Inspector.”

While some in the community have expressed a fear that Meaford is not being policed as well as it once was, and some insist that without a contract with the OPP, Meaford is receiving only the bare minimum of policing despite spending nearly $2 million per year on police services, the committee doesn't agree.

“We get front-line service,” Bell said. “The Inspector has told me that everything that is in the OPP arsenal is at our disposal.”

The committee members said that if Meaford were to enter into a contract with the OPP it would cost the municipality more money, but there wouldn't be any noticeable difference in service. “In essence, we are like 323 other municipalities (that are policed by the OPP), we have front-line OPP service,” Bell insisted.

Asked why many in the community have expressed fear that Meaford isn't being adequately policed in spite of being a low-crime community, Bell said that he thinks it comes down to visibility. “They don't see them, but as the Inspector said to me, just because you don't see them, doesn't mean they aren't there,” Bell said.

Committee member Sonja Glass suggested that some of those that are adamant that Meaford isn't being policed properly are tied to the past. “I think for some people, they will say they used to see a police car drive down their street every morning, and they don't see that now so they assume that because they haven't laid eyes on them, that they're not present,” Glass said.

The committee members point to the data that shows Meaford to be a safe, low-crime community, and committee member Diane MacIntyre reminded that safe communities are the result of more than just having police cruisers on the streets. She pointed to facilities like Meaford's library, which help build community and provide safe places for residents, particularly for youth.

While the members of the new committee have been busy studying the data and immersing themselves in their new roles what they want most is to hear from residents, and they encourage anyone with concerns or ideas about policing in the municipality to contact the committee's email address, policing@meaford.ca, to express their thoughts. The committee's next meeting will be held on November 13, at 2 p.m., at Meaford Hall.