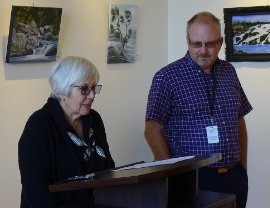 The Municipality of Meaford conducted an emergency preparedness exercise on Thursday October 10, along with a number of partners including Grey County EMS, the Meaford Hospital, Social Services, and Town of the Blue Mountains.

During the exercise media was told that a vehicle collision had damaged the pumping station at the water treatment plant prompting a full water ban to be issued. A subsequent watermain break made matters worse under the simulation.

After a mock press conference held at Meaford Hall on Thursday afternoon, Mayor Barb Clumpus told The Independent that the exercise had gone well.

“It's an excellent learning environment, it really is,” Mayor Clumpus told The Independent. “We have met over the course of the year as a team, but there's nothing like a real exercise to really nail down some of the things that we may have missed.”