Back to the Drawing Board For Leith Beach Property Owner 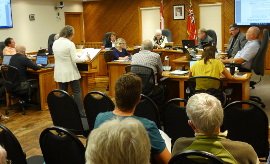 A large number of Leith Beach area residents returned to the council chamber on October 7 to reinforce their opposition to a proposed land exchange at the beach in order to accommodate the development of a restaurant on the property.

At council's June 10 meeting residents had a number of concerns with the proposal, including the loss of land in the beach area, access to the boat launch at the beach, parking, safe entry and exit from the beach parking lot, access to public washrooms, the installation of a large septic bed in close proximity to the shoreline, along with concerns that should the proposed business fail, as many have at the location, the property could revert to a residential property.

A revised proposal presented at the October 7 council meeting had not altered the opposition expressed by residents who questioned the suitability of the property for the size of operation proposed. A number of residents took the opportunity to step up the the podium before council in order to express their views and to ask council to quash the plan.

In a report to council staff explained some of the changes to the original proposal presented in June.

“While the initial proposal referenced an occupant load of 61 persons for the restaurant, the applicant has agreed that this can likely be reduced, though he strongly believes that an occupancy of 50 persons is necessary to ensure viability of the proposed restaurant use. This number would include on-site staff as well as patrons,” reported staff. “Additionally, staff and the applicant have discussed that the comments received don’t generally support the provision of public washrooms at the cost of the additional land area needed to support the septic system to accommodate them. Adjusting the septic design to reflect a reduced occupancy and the removal of public washrooms would facilitate a lesser land transfer request (approx. 365m2 vs 827.44m2) which could be detailed and refined through further design work.”

Staff also highlighted the importance of spaces like Leith Beach to residents.

“That said, a subset of the public comments received specifically oppose transfer of lands by the Municipality on a more philosophical basis, with comments encouraging the retention of all public lands at Leith Beach in public ownership and framing a transfer as being contrary to the public good and in service of private benefit/gain at the expense of the local community,” noted staff in their report to council. “Staff strongly agree that public lands, in particular those providing access to natural resources such as Georgian Bay and Bothwell’s Creek, should be prioritized and protected by the Municipality for the public goods they provide. However, staff are not of the opinion that this precludes any and all transfer of public lands into private ownership where public use and access can be maintained and/or enhanced and where such transfer would support broader community and municipal objectives.”

Proponent John Liddell told council that he is trying to realize a dream.

“The intent of this (proposed) land swap has never been to involve any aspect of the actual beach,” Liddell told council. “The beach, the sand area has nothing to do with this proposal. What I am asking for is to purchase fifteen percent of the actual area and that is only for a new septic system and the septic system will be covered in grass and ironically there is currently a portable outhouse and a garbage bin located there.”

“I think this is something that we can all recognize, that we can all empathize with folks who have a special place in their hearts and this is a very very tough decision for us all going forward,” said Mayor Barb Clumpus. “We all value the places that are near and dear to our hearts.”

Councillor Ross Kentner had his own proposal for the Leith Beach area.

“I applaud staff for trying to facilitate some economic development in Leith,” Kentner told council. “But I would like to see a third option, that being that the municipality endeavour to acquire the proponent's property in order to first enlarge the beach park, secondly to make the beach a more visible component of the community of Leith, third to facilitate safer traffic patterns and the boating launch, and to include a playground with washrooms along with food services and recreational equipment rentals that could become a revenue stream for the municipality.”

While Councillor Kentner's suggestion was met with applause by some in the audience, it didn't gain much traction with his fellow council members, and Councillor Steve Bartley had some advice for Kentner.

After a lengthy debate, council voted 6-1 against the revised proposal moving forward as presented.

Asked for comment on Monday night after the council meeting, Liddell told The Independent that he is disappointed, but he isn't discouraged.

“Yes we are very disappointed but we will keep moving forward and go back to the drawing board, will look at options to move forward,” said Liddell. “I am not going anywhere anytime soon!”

Photo: Municipal Planner Liz Buckton presented a revised proposal for the Leith Beach property to council at their October 7 meeting.