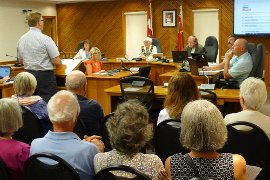 Meaford councillors were hesitant to approve the award of tender for the construction of the new library at a special council meeting held Monday, July 15, after learning that the project is already $1.6 million over the $5.5 million budget previously approved by council.

Of the five bids received for the library construction project, the three lowest bids were within $100,000 of each other, with Van Horne Construction submitting the lowest bid of $4,372,857.18, pushing the total cost of the project to $7.1 million.

Treasurer Darcy Chapman told council that roughly half of the $1.6 million overage can be attributed to soil conditions discovered after the municipality had purchased the former Foodland building at the corner of Sykes and Trowbridge Streets.

“Because of the seismic classification of the building, the costs have grown exponentially,” Chapman told council.

Chapman explained that after purchasing the building the municipality conducted a geotechnical analysis, which required boring eight-inch holes through the concrete floor to sample what is beneath. What was discovered was cause for concern and the result is increased costs.

“This is cause for excessive design and building (costs) in order to make sure that the structure is sound,” Chapman told council, adding that an additional impact is that plans for a future solar installation on the roof of the new library will be abandoned as the structure would not support a solar installation without a significant investment in the structural supports, making the project cost-prohibitive.

Chapman told council that while the overall cost of the project now exceeds the approved budget by more than $1.6 million, the net effect on the taxpayer will be an additional $61,000 in long-term debt.

“This is based on the difference between the October 2017 assumptions when direction was given by Council to proceed with the purchase of 11 Sykes Street, with an understanding that the project would incur $3 million in long term debt,” Chapman told council in his report. “Based on the above illustrated funding sources, $3,064,486 in long term debt will incur annual debt repayments of $184,140 assuming a 25 year loan at 3.49%. This is generally in line with prior expectations as the annual budget process since 2016 has gradually increased library funding to a stable point of $175,000 in the 2019 capital plan.”

The minimal impact on ratepayers suggested by the treasurer was little comfort to some on council who were visibly uncomfortable with the sizable overage.

Among the changed assumptions mentioned by the treasurer are a revised estimate of the selling price of the municipally-owned building at 390 Sykes Street, which currently houses the OPP detachment. Chapman told council that, while he had previously estimated that the municipality would realize $700,000 from the sale of the property (with the funds to be used toward the library project), he now estimates that the property will sell for more than a million dollars and he is now budgeting $950,000 to be realized from the sale of the property, which is to be listed in the coming weeks. Chapman also told council that in 2018 the $500,000 from fundraising was not included in budgeting for the project, nor was some $366,000 in upper level government funding.

Councillor Tony Bell reminded his fellow councillors that in October of 2017 council approved a $5.5 million budget for the new library, and he was adamant at the time that the project not cost any more.

“I really want to reinforce the fact that I want everything you (the library patrons) want, but it's all about the money,” Bell said, adding that he wants to stay true to his stance expressed during the last municipal election.

Deputy Mayor Shirley Keaveney was also hesitant to immediately approve the award of tender, given the projected budget overage.

“I expected a little project creep, that's going to happen a year later. I expected it would be (an additional) one hundred or two hundred thousand more than that (the $5.5 million budget), but being up at the $7.1 million now is a number that I am not comfortable with,” Keaveney told council.

In their report to council staff did identify a number of possibilities for lowering the cost of the project, but the amount that could be saved would be minimal. Chapman told council that a number of items have already been cut from the project due to cost, and there isn't much excess left to trim.

“We definitely do need a new library, we need a library that is accessible,” said Councillor Paul Vickers, who expressed frustration with the revised cost estimates but suggested that the municipality move forward. “I think the key number here in my mind anyway is that there's going to be $3 million in debt when we started this process a few years ago, and now the number is at $3.1 million. So we can debate about a lot of subjects, but I think that's the number that's important to me.”

Fundraising efforts have thus far raised more than half a million dollars toward the goal of raising $750,000. Currently Meaford's long-term debt is roughly $6 million; according to the province Meaford would be allowed to carry as much as $45 million.

While council wasn't pleased with the overage, they were also hesitant to outright reject the award of tender given the importance of the project, so after an exhaustive debate council voted to give initial approval for the award of tender (only Councillor Bell voted against), which allows the item to come before council in a week's time for final discussion and a final vote, giving councillors more time to study the numbers and decide how they would like to vote.

A vote against the award of tender would be costly according to Meaford's treasurer.

“Should Council decide not to award the tender, the municipality would still be required to pay project termination costs and lost profits for the remainder of the approved project services to LGA. Approximately $400,000 in professional fees have already been incurred. Lastly, the Municipality would still be left owning a building with no other plans or space needs requirements for other municipal operations, other than the ongoing need to address the limitations associated with the existing library facility,” Chapman told council in his report.

Photo: Meaford Library Board chair Mike Poetker addresses council before their debate on the award of tender for construction of the new library at council's July 15 special meeting.