Woodford Hall Will Soon Have A New Tenant 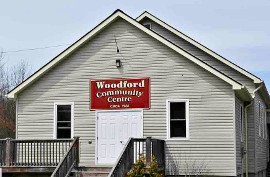 At their July 8 meeting Meaford council gave initial approval to a proposal that will solve two problems – low use of Woodford Hall, and finding a home for the Meaford Theatre Company.

“In 2015 the Municipality took over direct operations and maintenance of Woodford Hall and subsequently recognized a group of local dedicated volunteers as the 'Friends of Woodford Hall',” council was told in a report from staff. “Over the past four years staff from Parks & Facilities, Recreation Programs and Library divisions have tried various ideas to enhance the use of the facility including programming fitness classes, dance classes, music performances, library events, etc., with very little traction in sustaining participant numbers.”

Additionally, staff told council, the Meaford Theatre Company has been in search of a permanent, practical home.

“Since at least 2015 the Meaford Theatre Company (MTC) has been using cold storage space at the old Town of Meaford Works Shop located beside the arena at 145 Collingwood Street. The main intent of the space is to have a space for storage of props and sets. On occasion, the organization has also used the parking lot area next to the building to complete set building,” staff told council in their report. “Given the cost of rent for Meaford Hall, the MTC has been struggling to find an acceptable venue to complete rehearsals and run productions of plays for a number of years. In the spring of 2019 the MTC rented the large hall at the Meaford & St. Vincent Community Centre to run a four-night production.”

In 2017 there were a total of 14 rentals of Woodford Hall, and 16 rentals in 2018, not including municipal uses such as budget meetings or library events.

Meaford Treasurer Darcy Chapman told council that the municipality has worked with Woodford Hall and the Meaford Theatre Company to draft an agreement that would make the theatre company new tenants of the hall.

Staff have drafted a lease agreement, which will provide an exclusive 'first right of use' rental of Woodford Hall starting August 1, 2019, ending December 31, 2021.

“In essence, the MTC would use this facility as their home base throughout the year but the Municipality would be able to rent the facility out to other interested parties so long as these rentals don’t conflict with rehearsals or production nights. As well, a minimum 48 hours’ notice would be given to MTC by staff to ensure the facility was clean and free of any MTC equipment. Municipal Staff would still remain as the contact for all third party bookings and would also be responsible for cleaning the facility after any rental to allow the MTC to again have use of the facility,” staff told council in their report.

Under the terms of the agreement the Meaford Theatre Company will pay an annual rental fee of $5,000, and they will also be responsible for paying the heating and electrical bills, which total roughly $2,800 per year. The municipality will maintain facility insurance and will also be responsible for monitoring and testing of the water at the facility. All capital costs or facility repairs would remain the responsibility of the municipality.

Staff told council that with the annual lease rate of $5,000 plus the reduction of electricity and heating costs, “... the Woodford Hall operating budget may finally be in a positive variance position. Any surplus funds will be directed towards facility capital rehabilitation projects or possible enhancements.”

“So this might breathe some vitality back into it, get people out there looking at how awesome it is as a space,” Chapman told council.

Council was pleased with the recommendation from staff and voted unanimously in favour of the proposal.

“This is a truly an innovative and creative solution,” said Mayor Barb Clumpus.